by Vikram Dave
in Business
Reading Time: 3 mins read
0
A A 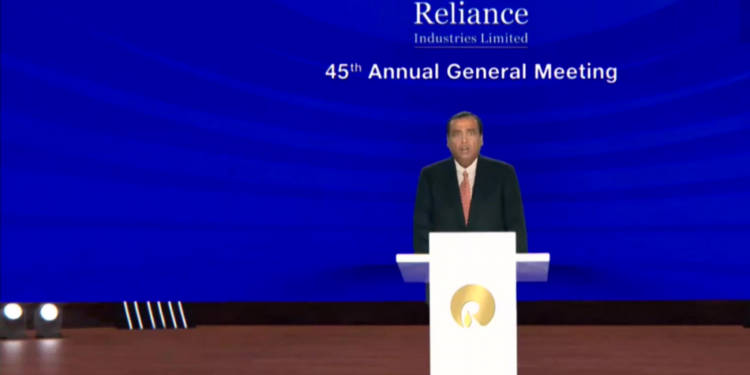 New Delhi. Billionaire Reliance Industries Chairman Mukesh Ambani currently addressed the 45th Annual General Meeting (AGM) of RIL shareholders. In this, he said that Reliance Industries is the largest taxpayer company in India and Reliance Industries has so far provided about 2.32 lakh jobs, which is the highest in comparison to others. This is a proof that Reliance Group is giving its full support in the development of the country. In this too, Reliance Retail has given maximum jobs. In this, he made many big announcements including the launch of 5G. He said that by Diwali, 5G will be launched in four metros (Delhi, Mumbai, Chennai, Kolkata). The company will invest 2 lakh crores on this scheme. Regarding Jio’s 5G service, Akash Ambani said that it is ultra high speed fixed broadband, with the help of which high quality educational content will be provided in every class of the country. Along with this, Reliance Jio will also launch cloud based PC service. Apart from this, work is also being done on indigenously developing end-to-end 5G stack, which will be equipped with advanced technology like quantum security. This new technology has been developed in-house by more than 2000 young engineers of Jio. He said that Jio Experience Center will be opened in the financial capital Mumbai as well as work is being done with Google on cheap 5G smartphones.

At the same time, Reliance Retail Director Isha Ambani said that a new FMCG business will also be launched this year. For this, a new agreement has been signed between WhatsApp and Jio Mart, which will enable WhatsApp Pay for Jio Mart. He further added that Reliance Retail has achieved a stellar record of turnover of Rs 2 lakh crore and EBITDA of Rs 12,000 crore, is currently one of the top ten retailers in Asia. Nisha Ambani said that over 200 million registered customers have been served on Reliance Retail’s physical stores and digital platform. With this, Reliance Consumer Electronics is going to set up 8700 stores in 7000 cities in the country. Mukesh Ambani said that he is working on a plan to expand the new energy business model around the world. In line with India’s Net Zero Emissions target to make India a global leader in new energy, we will also increase our investment in the manufacturing ecosystem with the acquisition of REC Solar for solar PV manufacturing.

Jio 5G services will connect everyone, everywhere and everything with the highest quality. We are committed to making India a data driven economy ahead of China and the US: Mukesh Ambani, CMD, RIL, 45th AGM Reliance Industries Ltd. pic.twitter.com/hYINd9gXJp

He further said that our 10GW solar PV cell and module factory based on REC technology in Jamnagar will start production by 2024 and its capacity will increase to 20GW by the year 2026. Mukesh Ambani said that Reliance Industries has set a target to increase gas production from 20 percent to 30 percent. Also, Reliance Group has decided to invest Rs 75,000 crore over the next 5 years in O2C to support PM Narendra Modi’s vision and mission of Digital India. In this meeting, he also indicated to hand over the command of his company to the next generation.