WB And FITCH: World Bank and Fitch’s answer to Modi’s opponents who are questioning India’s condition, know what they said 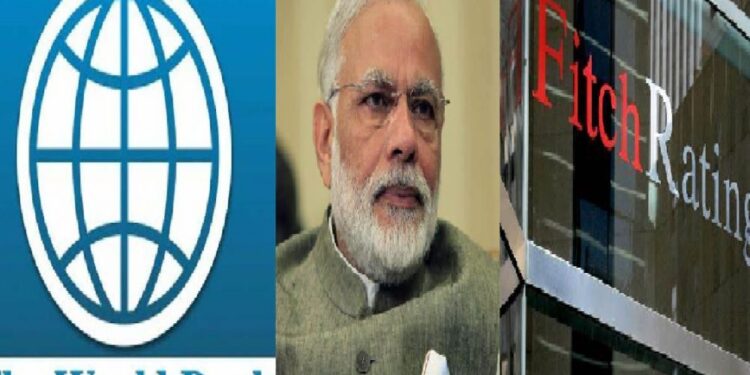 New Delhi. The war between Russia and Ukraine has been going on for the last 9 months. Because of this war, the economic condition of the world is very bad. Especially in the countries of America and Europe, inflation and unemployment are at their peak. All the companies are laying off. Amidst all this, in the case of the fifth largest economy of the world i.e. India, many people, including the opposition Congress, were speculating. There is speculation that there is a recession in India and the Modi government is doing nothing to save people from becoming unemployed and to stop inflation. The Modi government has not given the answer to these allegations, but the international agencies have definitely given it.

The World Bank has revised its 2022-23 GDP forecast upward to 6.9% from 6.5% due to robust economic activities in India, says World Bank. pic.twitter.com/1vZL8qiw0j

The World Bank on Tuesday revealed its estimate on the rate of development of all the countries of the world. The World Bank also explained India’s position in this. It has been said by the World Bank that in the current financial year i.e. 2022-23, India’s GDP is likely to remain at the rate of 6.9 percent. Earlier, the World Bank had projected India’s GDP to be at 6.5 per cent this year. At the same time, another renowned financial agency Fitch FITCH has also expressed its estimate about India’s GDP. According to Fitch, India’s GDP rate is likely to be 7 percent in this financial year. This assessment of both these agencies would have given a befitting reply to the people who are targeting the Modi government.

Government of India: 6.5%
,
Interesting that the government itself is most cautious.#gdp #india

Let us tell you that even before this, all the international organizations including World Bank, Moody’s, Fitch had expressed the possibility of India’s growth rate ie GDP being the highest. India’s financial condition was good even after Corona. Inflation had definitely increased in the past, but after increasing the repo rate by the Reserve Bank, there has been some reduction in the prices of essential commodities. There are chances of increasing the repo rate once again in the coming days. This will reduce the liquidity of the rupee in the market and inflation will be further tightened.

Who is Shaifali Verma: See who is Shafali Verma, who made the Indian cricket team the world champion at the age of just 19

Who is Shaifali Verma: See who is Shafali Verma, who made the Indian cricket team the world champion at the age of just 19

Get strong discount offer on Infinix Smart 6, chance to buy for just Rs 550