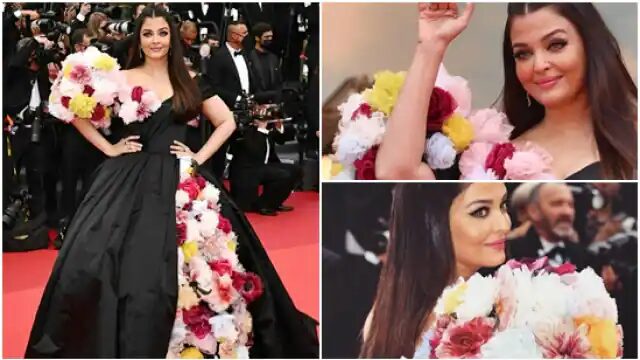 Aishwarya Rai Bachchan’s first look from Cannes 2022: Actress Aishwarya Rai Bachchan, who has made a special place in everyone’s heart with her acting and beauty, has a strong fan following. The Cannes Film Festival is in the news these days and fans kept waiting for Aishwarya’s Cannes look on Wednesday. In such a situation, now the wish of the fans has been fulfilled and the ear look of the actress has come in front of everyone. Photos of Aishwarya are becoming increasingly viral on social media. Aishwarya is looking very stylish and beautiful in these pictures.
Aishwarya red carpet look

Let us tell you that the actress, who has been spreading her flair at the Cannes Film Festival since 2002, has looted this time too. Aishwarya Rai Bachchan looks stunning at the 75th Cannes celebrations. Aishwarya is seen in a black gown with colorful floral motifs. As always, once again Aishwarya has won everyone’s heart with a smile.

Remind that this time the Cannes Festival is very special for India. India’s 75 years of independence are being completed. Coincidentally, Kan is also turning 75. India is also a country honored in the 2022 ‘Marché du Film’ (Cannes Film Market). Deepika Padukone has joined the jury of the festival at the Cannes Festival, which runs till May 28. Deepika, who is part of an eight-member Cannes competition jury, says India needs to support homegrown talent with ‘convincing’. The festival started on 17th May. “We have a long way to go as a country. I am really proud to represent the country as an Indian, but when we look back at 75 years of Cannes, we find that there are very few Indian films or actors or talents who have made it to it.”

‘Cannes Festival to be held in India’

After inaugurating the Indian Pavilion, Padukone said, “I think as a nation we collectively have the talent, the potential and all we need is conviction. I really think a day will come, when India will not have to come to Cannes, it will be in India.” The inaugural ceremony of the Indian Pavilion has been telecast live on the official YouTube channel of PIB. The Indian Pavilion was inaugurated at the Cannes Film Market by Information and Broadcasting Minister Anurag Thakur, music composer AR Rahman, filmmaker Shekhar Gupta, CBFC chief Prasoon Joshi, actors R Madhavan, Nawazuddin Siddiqui, Pooja Hegde, Tamannaah, Urvashi Rautela and folk singer Mame Khan among others. Done in the presence of