Akshay Kumar cheered after watching the video of PM Modi with the child, said- ‘Heart is happy’ 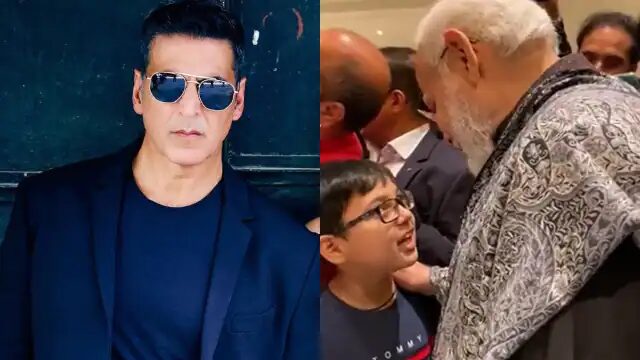 Akshay Kumar’s film ‘Ram Setu’ is about to come. The poster of the film was released recently. Now Akshay has shared a video on his Instagram in which a small child is singing a patriotic song with Prime Minister Narendra Modi. Akshay Kumar has posted many times before this tagging Narendra Modi. His interview with the PM was also in the news. Akshay appreciated the child after watching the video and described the special moment for him.

PM is on a visit to Europe

The heart became happy to see such a lovely gesture of patriotism of this child. @narendramodi ji you gave him the moment of his lifepic.twitter.com/2sVeYKlcmr

In the video, PM Modi is standing and one of his hands is on the shoulder of the child. The child sings the song ‘O Janmabhoomi Bharat’. On listening to his song, the PM also starts pinching his fingers with him. At the end of the video, he praises the child. PM Modi is currently in Berlin, Germany. He is on a trip to 3 countries in Europe.

Sharing the video, Akshay Kumar wrote in the caption, ‘Happy to see this child’s patriotism in such a lovely way. Narendra Modi ji, you have given the special moment of his life.

Multiple movies in the pipeline

Talking about Akshay’s films, ‘Ram Setu’ will be released on this Diwali. Jacqueline Fernandez was seen with him in the poster which was released in the past. However, he was also trolled for the poster as Jacqueline had a torch in her hand while Akshay was seen searching for something under the torchlight. Apart from both, Nusrat Bharuta is also there in ‘Ram Setu’. The film is directed by Abhishek Sharma. It is produced by Aruna Bhatia and Vikram Malhotra.

Apart from this, Akshay Kumar has ‘Prithviraj’, ‘Selfie’, ‘Raksha Bandhan’ and a film with Radhika Madan whose name is yet to be decided.