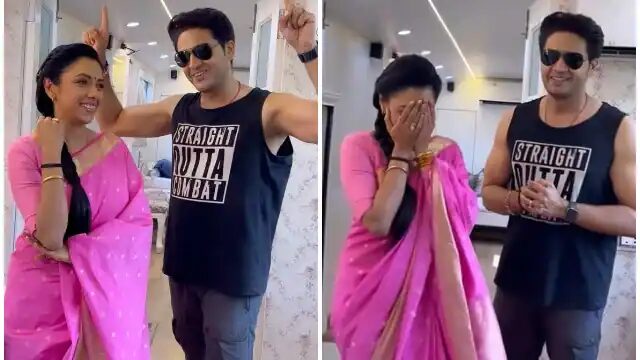 A video that surfaced from the sets of TV’s superhit serial Anupama is making a lot of noise on social media. Anupama’s lead actress Rupali Ganguly and Gaurav Khanna are seen in this viral video. Let us tell you that these days the makers of Anupama are focusing a lot on their characters Anupama and Anuj Kapadia. Both are about to get married and all the twists of the serial are woven around this track. In the video that surfaced, Anuj Kapadia is seen taking revenge on Anupama in a loving way.

What’s the matter after all?

Actually, a few weeks ago, on the sets of Anupama, Rupali Ganguly had a lot of fun seeing Gaurav Khanna in a pink sweatshirt. Rupali hummed the song ‘Pinky Hai Paisawal Ki’ for Gaurav and also pulled his leg a lot. In the new video, Rupali Ganguly is seen in a pink sari and this time Gaurav Khanna is seen taking his revenge. Seeing Rupali, Gaurav is also singing the same song. In the video, Rupali Ganguly is blushing and giving amazing expressions. So far this video has been viewed by more than 80 thousand people on Instagram.

The story of serial Anupama is going to take a new turn from this week. Anuj and Anupama’s pre-wedding function is about to end. Now both are going to get married but before that Anupama Upcoming Twist in the story of Anupama is about to come. In the coming days, it will be shown that Malvika will talk about going to the US and Anuj Kapadia will get upset after hearing this. He will try his best to stop Malavika and in the end will say that if she leaves then he will cancel his marriage.