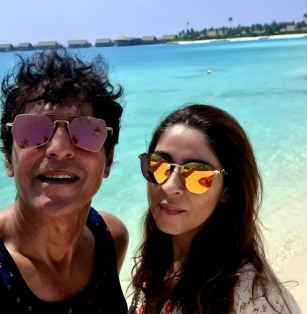 New Delhi, July 27 (IANS)| Actor Chunky Pandey doesn’t mind being recognized as the father of actress Ananya Panday. He says that he always wanted to be known by this name. Ananya is the elder daughter of Chunky, who made her Bollywood debut in 2019 with Karan Johar’s Student Of The Year 2.In just two years, the 22-year-old has been one of the most talked-about personalities in the industry with over 3,157,000 followers on Twitter and 19.6 million followers on Instagram.
They even have a huge lineup of films like Shakun Batra’s as yet untitled Deepika Padukone and Vijay Deverakonda starrer ‘Liger’.Talking about his daughter’s growing success, Chunky recalled the time when her father shared the excitement of being known as the father of the ‘Aankhen’ actor.“Years before I became an actor, I had very famous doctor parents. I was always known as the naughty son, son of Dr. Pandey,” Chunky told IANS.
He further added, “Then a day after becoming an actor in 1987, I remember my father attending a heart surgeon’s conference in Delhi and when he was presented on stage he was introduced as Dr. Pandey. Gaya, who is also actor Chunky Pandey’s father, and my father was very excited.”The actor recalled that, “Actually, there were no mobile phones then, but he called me on the STD line and said Chunky, I am very proud of you. I have been introduced as your father.”Chunky feels exactly the same way for Ananya.
The 58-year-old actor said, “As it is now, I feel that whenever I am presented as Ananya’s father anywhere, I feel happy. I think seeing her success makes me see my own success.” I am more than happy. I was very busy working when I was having success.”“With that, yes, I’m working, but it really makes me proud and it’s 10 times more to see a kid succeed at something.”He insisted that, “Yes, I am proud to be Ananya Pandey’s father and I want to be known as her always. I have another daughter Riyasa Pandey and I want to be known as her father as well.” “
(Disclaimer: This news has been published directly from news agency’s Syndicate feed. It has not been edited by AnyTV News team.)

A father who made a deal for his son, know why