Even before Aashram 3, Esha Gupta raised the temperature of Instagram, shared hot pictures

by Sandhya Hirani
in Entertainment
Reading Time: 4 mins read
1
A A 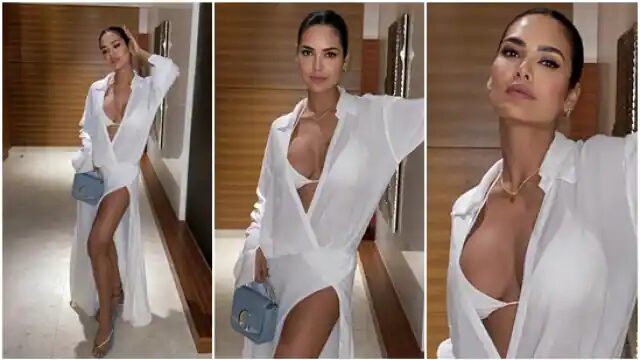 Bollywood actress Esha Gupta is very active on social media and often shares her pictures. Fans love Isha’s bold acts and her photos often go viral. Meanwhile, once again Esha Gupta has shared her super hot photos on Instagram, which are becoming increasingly viral. Esha Gupta is looking very bold in her latest photos and social media users say that even before the release of the upcoming web series Ashram 3, Isha has started raising the temperature of Instagram.

Esha Gupta recently shared three photos on Instagram. Isha is looking very hot in these three photos and is praising her. The pictures shared by Esha Gupta of white transparent gown are being liked by social media users. In a short time, lakhs of likes have come on these photos and along with fans, celebs are also commenting a lot.

Remind that recently the trailer of Ashram 3 was released, which became quite viral. Viewers are quite excited for the third part of Bobby Deol starrer web series. Esha Gupta will also be seen in the series and is seen giving very bold scenes in the trailer. Let us tell you that the people of Bobby Deol’s web series Ashram were waiting for a long time. After its trailer came out, it is being discussed on social media. People are very excited for the series.

Read: RRR will premiere on OTT ahead of time, know when and where to watch which version

Let us tell you that many times social media is also trolled due to bold avatar. Some time ago, while talking to Hindustan Times, Isha had said about this, “This is a straight gender inequality. A lot of actors share their shirtless pictures on social media, but then why not ask them to cover.” People look at him and say- ‘Wah bhai what a body’.” Along with this, Isha also took a jibe at the thinking of those who say that girls’ clothes are responsible for rape. Isha said, ‘It is the mentality of the people which should be blamed. If the thought of exploitation or rape also comes after seeing the clothes of the woman, then it is a matter of trouble.