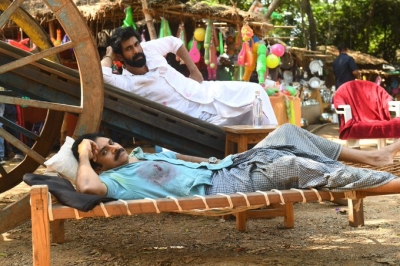 Hyderabad, (IANS)| Despite being a remake, Pawan Kalyan and Rana Daggubati-starrer ‘Bhimla Nayak’ continues to top the list of most awaited Telugu films. The makers of ‘Bhimla Nayak’ released a picture from the sets where Rana and Pawan Kalyan are shooting for a short schedule. In the picture, Rana Daggubati and Pawan Kalyan are seen chilling together on the sets in between shots.
Though the picture looks like a casual pose from the sets, the stars are seen recreating the ‘Gopala Gopala’ pose. ‘Gopala Gopala’ is a film in which Pawan Kalyan and Rana’s uncle Venkatesh Daggubati acted together.That poster featuring Pawan and Venkatesh had a magical hype at the time. Now that Rana and Pawan are about to share the screen together, they are recreating the pose.
‘Bhimla Nayak’ will be completed soon, to enter post-production, hence the team is working hard to wrap up the talkie part soon. ‘Bhimla Nayak’ is the official remake of Malayalam film ‘Ayyappanam Koshiyum’.
(Disclaimer: This news has been published directly from news agency’s Syndicate feed. It has not been edited by AnyTV News team.)

‘Bhimla Nayak’ created a ruckus ahead of its release

‘Bhimla Nayak’ created a ruckus ahead of its release