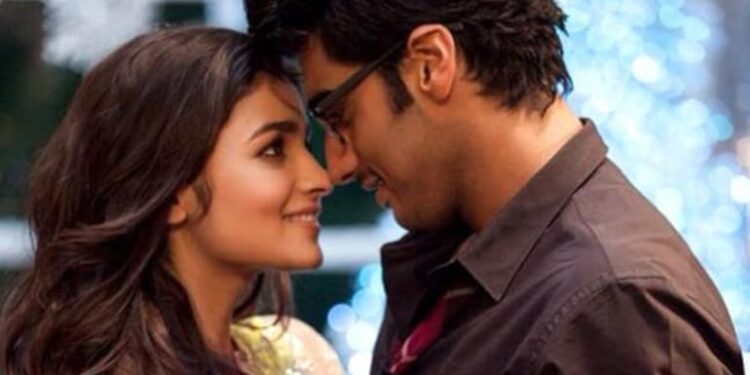 When stars act for any film, they have to give many types of scenes. In some they have to beat each other and then they have to do intimate scenes too. There are also some scenes of kissing where the hero-heroine has to kiss each other. Although celebs seem to avoid talking about these scenes, but this is not the case with Arjun Kapoor. Arjun Kapoor has spoken openly about the kissing scene with Alia Bhatt in an interview.

Well, what is common in movies? Almost every movie now has some kissing scene. Arjun Kapoor had a kissing scene with Parineeti in the film ‘Ishaqzaade’ in 2012 and with Alia in ‘Two States’ in 2014. Shortly after the release of the film ‘Two States’, when Arjun was asked which Bollywood heroine he considers to be the best kisser. Arjun had to choose a name from among Parineeti Chopra, Kareena Kapoor Khan, Deepika Padukone and Alia Bhatt.

In response to this question, Arjun said, ‘Alia Bhatt is the best kisser on screen among heroines. I really liked kissing with her.” He added, “When I had to kiss for the first time in Ishaqzaade, I was a little nervous. That scene with Parineeti didn’t go well. When I had this scene with Alia. So it went very smoothly. I don’t want to make any comparisons but I love kissing Alia. She is the best kisser.”

Arjun’s co-star Alia also spoke about the kiss in the film, she said during an interview, “I am never satisfied being an actor and always try to make the scene better with my fillings. ” Perhaps this is the reason why he did the scene with full fillings.

Let us tell you, this kissing scene in the film happens between Alia and Arjun when they are sitting in the canteen of IIM College Ahmedabad. And suddenly Alia starts kissing. The film’s director Abhishek Varman was already looking satisfied with the take but Alia kissed Arjun for the entire six takes.