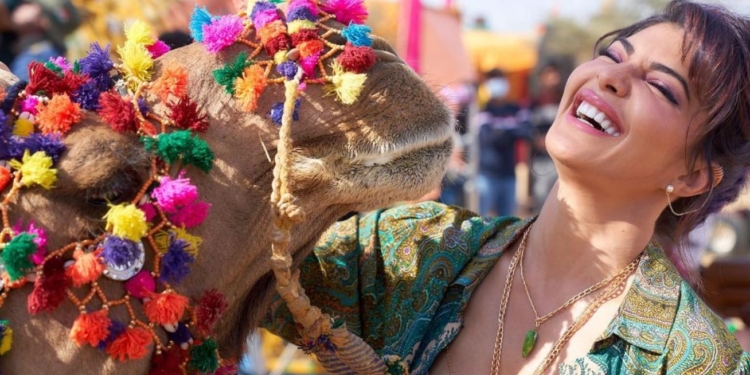 Mumbai, October 23 (IANS) | Jacqueline Fernandez is known for her talent as a dancer, an actress and an entertainer. However, her human side is something that is not talked about much. The actress has now pledged to change the lives of 40 girls through her foundation YOLO and United Sister Foundation.
Jacqueline’s YOLO Foundation in collaboration with the United Sister Foundation has announced that starting October 24, 40 young girls will be helped to transform their lives so that they can begin their new journey to a life of dignity and independence. Shedding light on the same, the actress took to Instagram and wrote, “I feel humbled to be a part of this organization USF where they have pledged to change the lives of many young girls. Tomorrow October 24 at 10:00 AM , they begin their new chapter by enlisting 40 new girls to embark on their journey to become the iconic and independent women they are today!”
YOLO Foundation donated masks and sanitizers to the Mumbai Police during the initial phase of the pandemic. He also took the responsibility of providing one lakh meals per day to the needy people and feeding the stray animals. Apart from this, the actress has also adopted some villages and has done other selfless deeds.
(Disclaimer: This news has been published directly from news agency’s Syndicate feed. It has not been edited by AnyTV News team.)

Surat: 17 students of Chauryasi-Olapad taluka with the help of Adani Foundation passed the government scholarship exam.

Surat: 17 students of Chauryasi-Olapad taluka with the help of Adani Foundation passed the government scholarship exam.

Nepal: All flights stopped, passengers stranded for two and a half hours, operation now started, know the reason

Congress protesting against BBC documentary ban, has also banned these documentaries, then why the protest?

Why sharks laughed after listening to this entrepreneur, while Namita felt bad about what he said