Kamaal R Khan: From ‘Revenge’ to ‘Kisat’, why did KRK’s tone change by the end of the evening!

Mumbai Calling himself a film critic and actor Kamal R. Khan i.e. KRK is again in discussion. This time the reason for the discussion is his tweets. On Sunday, KRK did a tweet that he is back. He had told that he had returned to take revenge. Seeing his tweet, many people felt that now Bollywood people are not well and KRK will make some new revelations, but by the end of the evening, their tone changed. The way KRK was expressing his displeasure by putting emoji in the first tweet, his stand was shown in the second tweet, just opposite. You see how Kamal Khan was talking about taking revenge in the first tweet.

KRK deleted the revenge tweet. After this he wrote in a new tweet that Media is making new stories. I have returned and am safely at my home. I don’t need to take revenge on anyone. I have forgotten all the bad things that happened to me. I believe it was written in my destiny. KRK did not reveal why after saying the revenge thing, now he has decided to forget everything. Was there any pressure or fear behind this? Here you can see the fate of KRK. 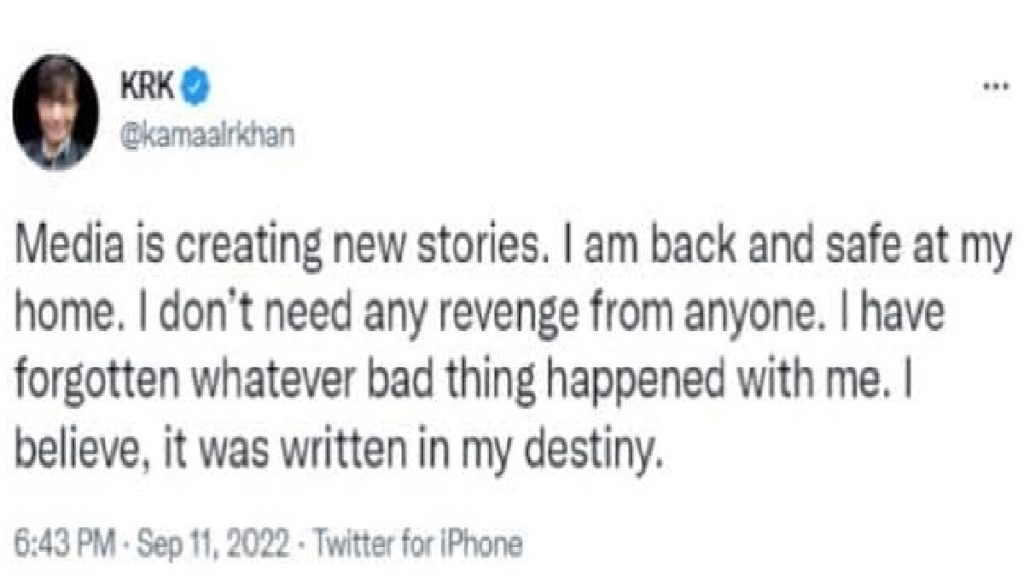 Let us inform that KRK was arrested by the police from Mumbai airport on the night of 29 August. Later, he was also arrested in an old case of sexual abuse. Court sent KRK to jail. KRK tweeted his revenge as soon as he got out of jail. which went viral. In the year 2020, KRK had a controversial tweet on Rishi Kapoor, Akshay Kumar and Irrfan Khan. KRK is always in the news due to his controversial statements.