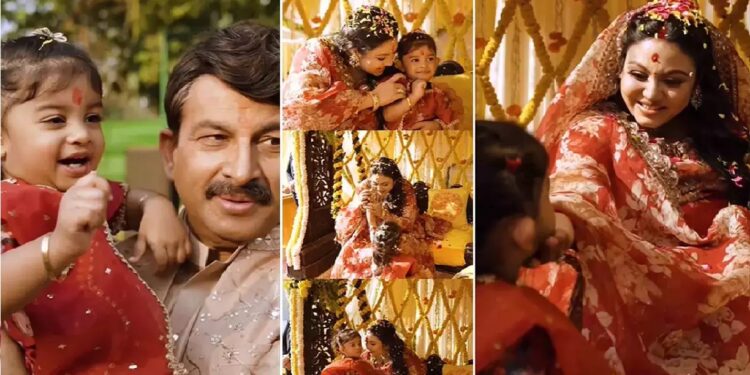 New Delhi. After Bhojpuri, the big screen and now BJP leader Manoj Tiwari, who created rebellion in politics, is going to echo in the house of happiness. Manoj Tiwari is about to become a father for the third time at the age of 51. Manoj Tiwari himself has given this good news to his fans through social media. He hosted a lovely baby shower for wife Surbhi and posted the video on social media. Fans are very happy watching the video and are congratulating the actor and singer on becoming a father.

going to be a father for the third time

Manoj Tiwari has shared the video of baby shower on his social media. Expressing his happiness, the politician wrote in the caption – Some happiness we cannot express in words… we can only feel them. In the video, Manoj’s wife Surbhi is seen flaunting her baby bump. Everyone is giving gifts to Surbhi and taking their eyes off her. Manoj’s younger daughter is also seen in the video who is dressed up exactly like her mother. Really cute video. Please tell that Manoj Tiwari is going to get the pleasure of becoming a father for the third time. He is already the father of two girls.

Please tell that Manoj Tiwari’s personal life has always been a topic of discussion. Manoj Tiwari had done two marriages. He had first married Rani. Their marriage broke after 13 years. Manoj has a daughter named Jiya from his first marriage. The actor had revealed that he had got married only on Jiah’s advice. The daughter wanted the father not to be alone and to have a home. At the time of their divorce, there were reports that Manoj Tiwari and Shweta Tiwari’s closeness was the reason for the breakup of the marriage. Manoj Tiwari’s wife suspected both. After which the actor married for the second time during Corona, after which he had a lovely daughter and now he is ready to become a father for the third time.