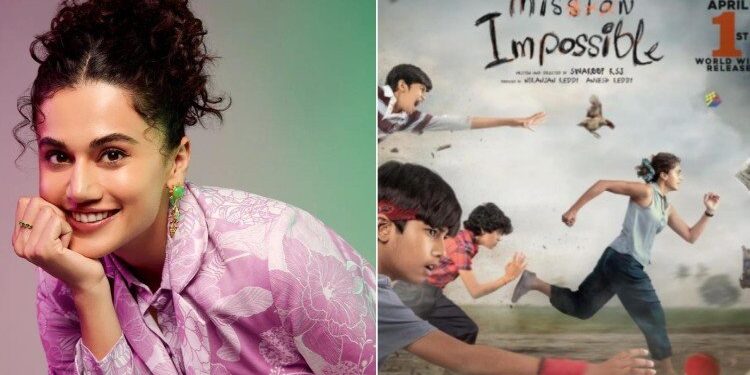 Taapsee Pannu, who made her Bollywood debut with Telugu cinema, has made a comeback in the Telugu world with the film ‘Mission Impossible’ directed by Swaroop RSG. Taapsee announced the release date of the film on 28 February (Monday). Taapsee is seen running in the poster of the film which is going to release on April 1, 2022.

Not in the film, I am running only in the poster

While releasing the poster of the film on Instagram, Taapsee wrote, “I am definitely seen running in the poster, but not running in any scene of the film. Running away here only shows our enthusiasm for the film.

Taapsee had joined the film 7 months ago

Taapsee Pannu joined the team of the film ‘Mission Impossible’ in July 2021. Taapsee has been curious about this film since the beginning. While joining the team, she had said, “For the last seven years, I have been looking for similar stories which I would like to see as an audience as well. The films that I would like to devote my time and time to, Mission Impossible is one of them.

The director of Mission Impossible has made hit films

Mission Impossible director Swaroop RSG has made the hit film ‘Agent Sai Srinivas Atharayya’ in 2019. Made on a budget of 50 million, the film was successful in collecting 200 million at the box office.

Taapsee started her career with Telugu cinema in 2010.

Taapsee Pannu started her acting career in 2010 with the Telugu film Jumandhi Nandam. After this Taapsee did successful Telugu films like Veera, Mr Perfect, Dundelo Godari. In 2013, Taapsee made her Bollywood debut with the film Chashme Baddoor, followed by films like Naam Shabana, Mulk, Thappad and Mission Mangal. Recently his film Haseen Dilruba was also released on Netflix.

FIPI: FIPI wrote a letter to the Petroleum Ministry, seeking to create a equitable investment environment to avoid losses