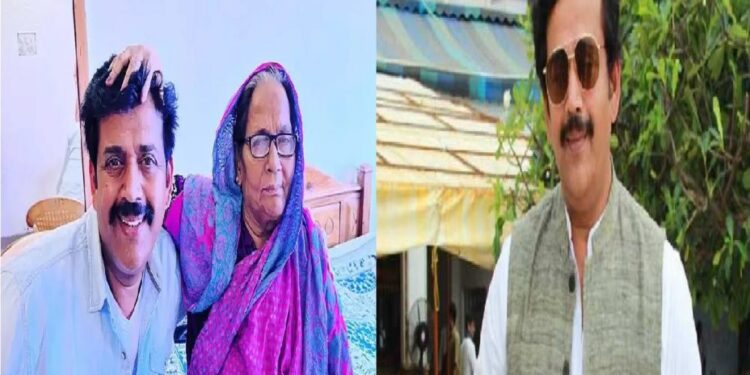 New Delhi. Who does not know actor Ravi Kishan, who turned to politics after showing his dominance in the Bhojpuri film industry. The actor is fully active in Hindi and Bhojpuri films as well as politics. The actors are spreading their flair in web series as well and fans are appreciating Ravi Kishan with their lots of love and praise. However, the past days have been very bad and difficult for Ravi Kishan. Actually, the news of the actor’s mother suffering from cancer had come to the fore, after which he was completely broken, but now a heart-warming news is coming out. Ravi Kishan’s fans will be very happy to hear this.

Actor Ravi Kishan has given information related to his mother to the fans, in which he told that his mother is absolutely fine and has returned home safely after winning the battle with cancer. Posting a photo of himself and his mother on social media, he wrote – Heartfelt thanks to Mr. Pankaj Chaturvedi, senior doctor of Tata Cancer Hospital and all his doctor team, mother returned home, you all dedicated your life to cure her. The actor is also thanking the doctor who treated him in his post. After this post of Ravi came out, the fans are very happy and are also praying wholeheartedly for the actor’s mother. At the same time, fans are also joining the actor’s happiness by commenting.

Heartfelt thanks to the senior doctor of Tata Cancer Hospital, Shri Pankaj Chaturvedi ji and all his doctor team, mother returned home, you all dedicated your life to cure them. pic.twitter.com/2jpUjoTM5l

Let us tell you that the actor had lost his brother some time back. After which he did not even emerge properly from the grief that the news of his mother suffering from cancer came to the fore. Ravi Kishan himself had informed the fans about his mother’s suffering from cancer through social media. He posted on Twitter and wrote – For the past few days, there is a constant struggle in the family with the health problems of my dear ones. Presently my revered mother is in the grip of cancer, who is being treated at Tata Cancer Hospital Mumbai. It is going on.. Mahadev please, Mother get well soon.. On this post, fans wished for a speedy recovery for the actor’s mother.