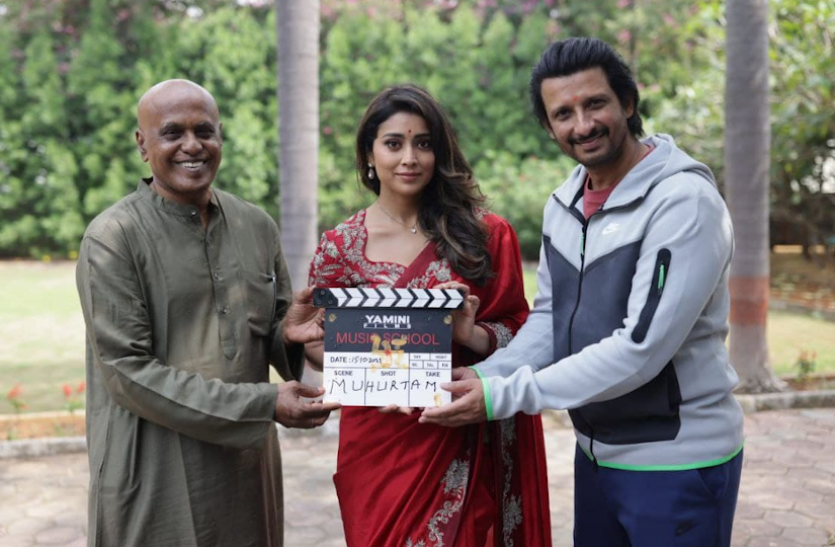 Bollywood Updates: A unique musical by Ilaiyaraaja – ‘Music School’, directed and written by Papa Rao Biyala, the Muhurta Puja of this film is being performed on the day of Dussehra. The team associated with the film has started preparations for the film on this auspicious occasion. Raising the excitement among music lovers, the Hindi-directed musical film of Biyala will feature Sharman Joshi, Shriya Saran and Shaan (as singer and actor).

The shooting of this film will start from November 15 in Goa. To give the film a realistic feel, the production team behind the film has started 30-day rehearsals for 12 songs in Hyderabad with Hollywood choreographer Adam Murry and his collaborator Paul Saunders.

This series of 12 songs is about the pressure of our unimaginable education system, in which children are given the goal of becoming doctors and engineers by rote equations. Envisioning the importance of art in the lives of students, the film will recreate three songs from the Hollywood classic ‘The Sound of Music’.

Papa Rao Biyala says, “I really enjoyed writing this film and now it will be even more fun to watch the music and visuals of the film airing. As a cine-lover, I have been fascinated by Broadway musicals and I think it will be fun to watch the film. It is believed that the story of the film gets strengthened with the music and dance choreography which drives the story forward. I am extremely honored that the legendary maestro Ilaiyaraaja is composing the music for this film.”

Sharman Joshi says, “I am extremely excited to start my journey on Dussehra with ‘Music School’. It is a very different film from what I have done before and I am thrilled to try something new. In front of the audience. It will be a lot of fun presenting this genre.”

Shriya Saran says, “I seek blessings for this film which has such a big heart. I am glad that we are making a musical debut on Dussehra. I pray that the momentum towards this film continues and we can provide a memorable film to the people.”

Sara Ali Khan had to be embarrassed because of this one scene of mother Amrita Singh’s film. sara ali khan embarassed of amrita singh amitabh bachchan film mard | AnyTV News

Sara Ali Khan had to be embarrassed because of this one scene of mother Amrita Singh’s film. sara ali khan embarassed of amrita singh amitabh bachchan film mard | AnyTV News

Punjab Assembly Elections: Election Commission has changed the date of voting, now instead of 14, voting will be held on February 20

Bigg Boss15: Salman Khan got angry on this man, gave the most dangerous warning ever