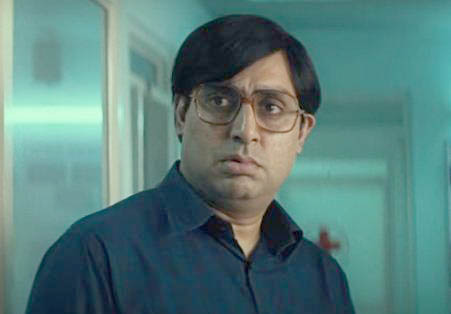 Mumbai, (IANS)| Bollywood actor Abhishek Bachchan is all set for the release of ‘Bob Biswas’. Abhishek says it is one of the most wonderful films he has worked on. The makers of the film on Friday launched the trailer of the crime thriller, in which Abhishek looks amazing as a contract killer.The over two-minute long trailer chronicles the journey of Bob Biswas, who comes out of a coma after a long time and cannot remember any details about his life and his past, including that of his family.
As he tries to remember his identity, episodes from his past come alive, leaving him in a moral dilemma between the history of his own actions versus the newly developed sense of right and wrong.Talking about his character, Abhishek said, “I have thoroughly enjoyed working in Bob’s dark world and making the film. This is one of the best movies I have worked on and I hope people really enjoy the trailer and the film.
The character of serial killer Bob Biswas, who comes across as an insurance agent, was first seen in Vidya Balan-starrer Kahaani, which released in 2012. This character in ‘Kahaani’ was played by veteran actor Shashwat Chatterjee. The character’s role was small but very impactful.Actress Chitrangada Singh, who plays the female lead, said: ‘Bob Biswas’ is a unique film, and I am proud to be a part of it. It is a fascinating story of an interesting character and the people around him. The film is full of mystery, fun.
Directed by Diya Annapurna Ghosh and written by Sujoy Ghosh, ‘Bob Biswas’ is produced by Gauri Khan, Sujoy Ghosh and Gaurav Verma. The film is a bound script production presented by Red Chillies Entertainment.‘Bob Biswas’ will release on ZEE5 on December 3.

Coming from Australia, this villain showed in Hindi films. bob christo who acted as a villain in so many movies | AnyTV News

Had to romance in the balcony Heavy, the woman fell without clothes; Video went viral on social media

Naidunia Gurukul: Small actions can give big and positive results in future