VIDEO: In Kapil Sharma’s show, Kangana Ranaut took a jibe at Ananya Pandey, everyone laughed after seeing her acting. 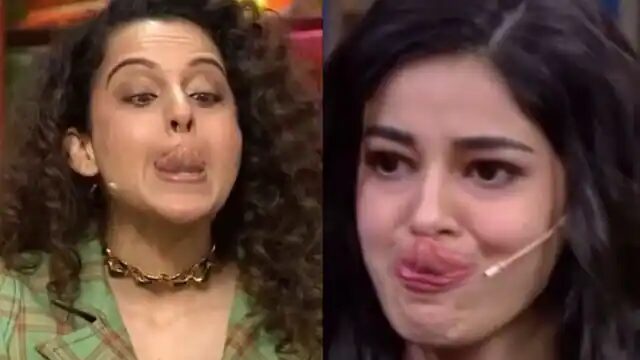 Kangana Ranaut is often seen messing with someone or the other in Bollywood. Sometimes she has been targeting Karan Johar and sometimes Starkids. Kangana has been openly speaking on nepotism. This time he has taunted Ananya Pandey. The ‘Dhaakad’ girl had recently reached Kapil Sharma’s show. His episode aired on Saturday. Now a video of the show is going viral in which she explains the meaning of the word Bolly Bimbo. After the kind of act Kangana shows, everyone remembered Ananya Pandey, when she did the same in Kapil’s show.

A video of Kapil Sharma’s show has gone viral. During the show, Kapil shows a photo of Kangana in the caption of which Kangana used the word ‘Boli Bimbo’. When Kapil asks the meaning of the word Bimbo, Kangana tries to touch the nose with her tongue and imitating Ananya Pandey says, ‘I can touch my nose with my tongue.’ Although he did not name anyone, but his gesture was enough for the audience to understand.

Actually Ananya Pandey came to Kapil’s show a few days ago and she showed it by touching her nose with her tongue and said that this is her talent. Ananya was trolled a lot at that time. Now fans have shared Kangana’s video.

The photo of Kangana that was shown in The Kapil Sharma Show was shared by her in July 2021. When the users came to know, they started commenting on that photo. One user wrote, ‘Amazing insulting curry Ananya, amazing.’ Another said, ‘Next level trolling, epic humiliation.’ Another said, ‘Bolly Bimbo… Insult by copying Ananya Pandey.’

Kangana is currently busy promoting ‘Dhaakad’. Arjun Rampal, Divya Dutta and Sharib Hashmi are with him in the film. The film will release in cinemas on May 20.