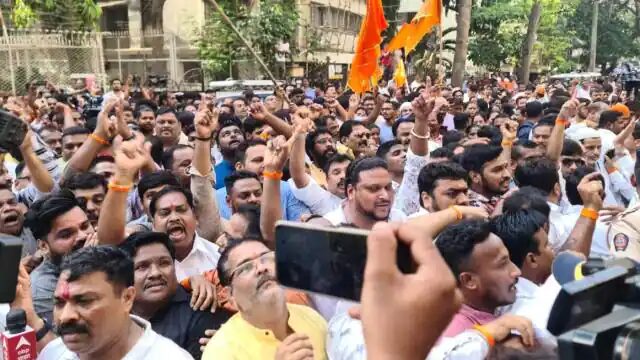 In Maharashtra, the issue of recitation of Hanuman Chalisa outside ‘Matoshree’, the residence of Chief Minister Uddhav Thackeray, has heated up. Here, Shiv Sena workers demonstrated at the house of MP Navneet Rana and MLA Ravi Rana. At the same time, in view of the seriousness of the situation, the security of the CM’s residence has been increased. The Rana couple has made many allegations including harassing the government. The special thing is that the controversy over the use of loudspeakers in mosques continues in the state.

what was the matter

Independent MLA from Badnera Ravi Rana and his wife MP Navneet Rana had decided to chant Hanuman Chalisa outside Matoshree. After this the security of CM residence was increased. Shiv Sena leaders protested outside the Rana couple’s house in Khar, Mumbai only after this announcement by both the leaders.

Allegations of attack on Shiv Sena

According to news agency ANI, MLA Rana expressed grief over the entire incident through a social media post. He wrote that the police is not allowing him to go outside the house. He also alleged that Shiv Sena tried to attack the residence. “We have always considered Matoshree a temple… Uddhav Thackeray is only looking for political gains,” Rana said.

He said, ‘They are not members of Balasaheb because if they were, they would have read Hanuman Chalisa with us. CM is misusing his power in Maharashtra. Shiv Sena is trying to attack us by entering our house. If we are not safe then how will the general public be safe.

His wife said, ‘Maharashtra CM has given orders to Shiv Sena workers to harass us. They are breaking barricades. I am repeating that I will go out and recite Hanuman Chalisa on Matoshree. CM only knows to put people in jail.

Shiv Sena leader Anil Desai accused the Rana couple of disturbing law and order. According to the agency, Desai, who was outside Matoshree, said, “They have challenged the law and order situation. Someone has inspired them to do so. Shiv Sena workers are here to protect Matoshree. Here, Mumbai Mayor Kishori Pednekar said, ‘We are waiting, we will put Hanuman Chalisa in front. We are waiting to teach them a lesson.