Because the hunger of the stomach is bigger than the fire! watch viral video 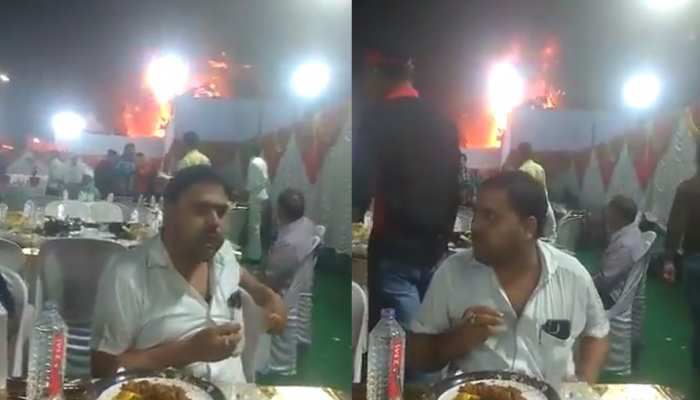 Nothing can be said about what you see on social media. Recently, such a video is becoming increasingly viral on social media, in which it is seen that a huge fire broke out in the pandal of a marriage hall, but it did not affect the people present there. Usually in such a situation a stampede occurs. But the people seen in this video are seen having fun eating food even after the fire. According to the information, this video is from Thane in Maharashtra, where a fire broke out in a marriage hall late on Sunday night. However, it is a matter of relief that despite the presence of a large number of people in the hall, there has been no news of any injury or death in this accident.
It is worth noting that it is seen in the viral video that despite the terrible fire in the marriage hall, the people present there continued to eat food. People on social media are criticizing these people by targeting their insensitivity. In fact, the fire in the marriage hall was so severe that in a short time the entire pandal was burnt to ashes. During this the bride and groom were somehow saved. Along with this, other people were also taken out from there in time.

Stomach hunger is bigger than fire… A marriage hall caught fire in Thane, Maharashtra, but the people present there kept on eating, watch this viral video #SocialMedia , #ViralVideo pic.twitter.com/pyJCi1VqCu

Let us inform that 6 vehicles of fire brigade were engaged for about 3 hours to extinguish the fire in the hall. It is not yet known what caused the fire.At present, the police said that the investigation has been started in the case of the fire in the marriage hall. It is being investigated whether the incident of fire was an accident or whether someone did it intentionally. If anyone is found guilty then strict action will be taken against him.

This powerful adventure bike launched in India, will get the best features and price will be so. KTM 250 Adventure 2022 Edition Bike Launched In India | AnyTV News

Work on 6G technology started in India, will be 50 times faster than 5G