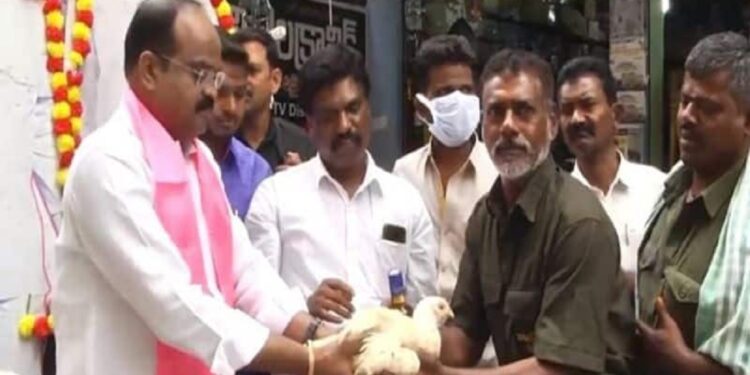 New Delhi. Politicians go to any extent for votes. What the leaders do not do in the name of votes is less. Today the best example of this has been seen in Telangana. On Wednesday, Chief Minister K Chandrashekhar Rao will launch his party at the national level. But KCR’s party TRS has done a strange campaign. Where the leaders of KCR’s party did not care about democracy nor the image of their party. Before the launch of the National Party, the candidates put up a counter properly. In which free liquor and chicken were distributed to the people. Its video has also surfaced.

It can be seen in the video that TRS leader Rajnala Srihari Warangal is publicly seen distributing liquor bottles and live chicken to the people. Long queues of people are also seen. The poster of CM KCR is also visible in the video. This video is becoming increasingly viral on social media. Users are fiercely classing KCR’s party. After coming to the fore of this video, many questions have arisen. Whether the opposition will compete with PM Modi in 2024 in the same fashion. Will KCR be able to make his image politically strong at the national level in this fashion? The question is also whether the people of KCR will accept in the name of cock and liquor.

You see how Modiji will stop this, these people are telling the people of India to drink alcohol openly to defeat you, O day is not far when they will leave no stone unturned to sell India for the power of India. ? pic.twitter.com/HrVTQwJ8gd

@ECISVEEP, @SpokespersonECI
Dear Election Commission of India, do you want India to follow the path of Sri Lanka. Strong Guidelines to be framed before 31st October 2022 to save Indian Citizen tax money. These freebies are dangerous and a block against India.@narendramodi