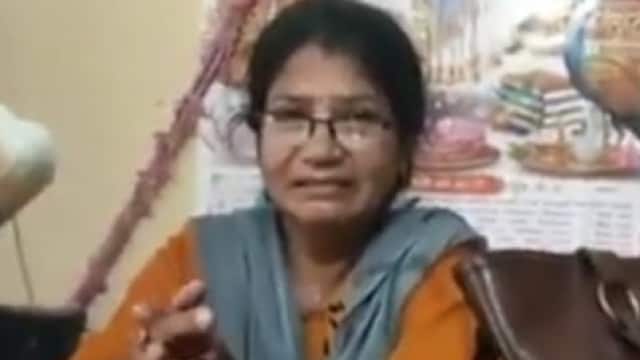 New Delhi. The Principal of Agra Inter College, wrapped in a cloud of sorrow in her eyes, made her grief public by taking the help of social media. He appealed to the police-administration for help. She said that she has brought the matter to the notice of the college administration several times, but till now no proper action has been taken in this direction. Let us now tell you the whole matter in detail.

In fact, the Hindu female principal of Inter College of Agra said that Muslim teachers teaching in the college are opposing her. Inciting the girls against him. The Burqa gang is bent on harassing them. The Hindu teacher said that whenever she goes to class, the students start harassing her and all this is happening because of the burqa gang. He further said that many times he has complained about this whole matter to the college administration, but till now no step has been taken in the direction of diagnosis. Not only this, the Hindu teacher said that many times the burqa gang is continuously threatening to remove her from her job. He said that at present he has to go through various financial difficulties. If he is removed from the job now, then his troubles will start.

Hindu female principals in Agra are upset with girl students wearing hijab and burkha. Her crying video is going viral. In this, she is also accusing the teachers of a community of her own college.#Agra #agraviralvideo pic.twitter.com/v2Khd8vbji

According to the principal, many times she has appealed to the students to come in uniform. Some people are reportedly upset with his appeal, after which efforts are being made to harass him. The burqa gang has now stood against him, which is instigating the girl students studying in the college against the principal. However, a complaint regarding the matter has been lodged with the college administration. Now in such a situation, what are some steps to be taken in the direction of resolving this entire dispute? All eyes will be on this.