Chhath Puja 2021: Political mercury is high in Delhi, BJP will celebrate the festival even after the ban of DDMA, AAP also retaliated 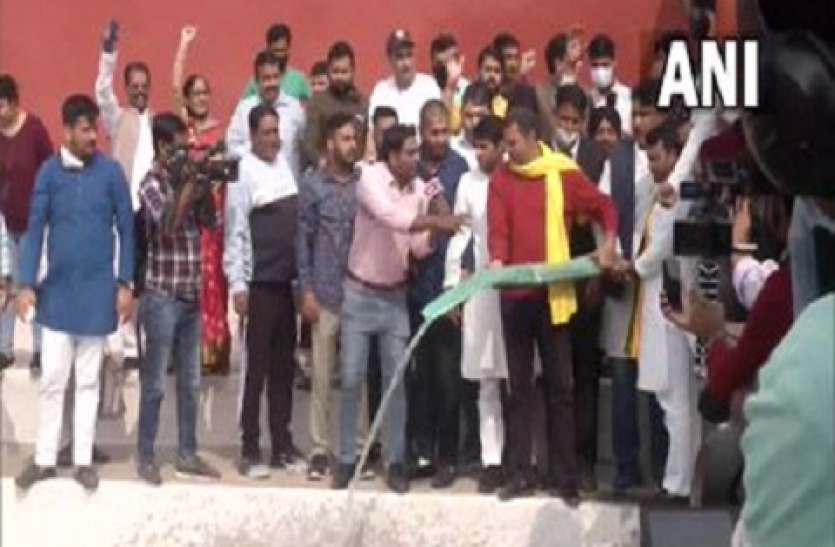 New Delhi. Political mercury is high in Delhi on Chhath Puja 2021. Both the Bharatiya Janata Party and the Aam Aadmi Party (AAP) are targeting each other. Despite the ban of DDMA, BJP has announced to celebrate Chhath festival. At the same time, the Aam Aadmi Party has alleged that the BJP has prevented the construction of ghat for Chhath Puja.

In fact, due to the increasing pollution, a large amount of foam has accumulated in the Yamuna river. The BJP is constantly surrounding the AAP regarding this pollution. Meanwhile, the Delhi Pollution Control Committee (DPCC) has deployed 15 boats to clear the foam from the Yamuna.

BJP has announced to celebrate the festival despite the ban on Chhath Puja at Yamuna Ghats. MP Manoj Tiwari said, the Kejriwal government had to impose a ban on poisonous foam. On the other hand, Parvesh Singh said that when the MCD and DDMA have given exemption, then why is the Delhi government prohibiting the celebration of the festival.

But he put a ban on Jhath Puja. Delhi BJP President Adesh Gupta and Manoj Tiwari announced to celebrate Chhath festival in the evening at Sonia Vihar.

Yamuna water not useful for agriculture
Let us inform that earlier BJP targeted the Kejriwal government for pollution in Yamuna. BJP state president Adesh Gupta said, whenever he is asked about pollution in Yamuna, Kejriwal blames Haryana for it, but according to DPCB, when Yamuna enters Delhi from Haryana at Palla, the BOD level 2 happens. And when Yamuna leaves Delhi, its BOD level becomes around 50. This water is also not useful for agriculture.

ALSO READ  Is Mamta preparing for Mission 2024 with PK?

On the other hand, Aam Aadmi Party leader Saurabh Bhardwaj has also hit back at BJP. He said, for the last two days, it is being discussed that where temporary ghats are being built, the BJP is preventing Chhath ghat from being built.

Now the BJP-ruled municipal corporation has lodged an FIR against Mishra, the MLA from Dwarka, for making a pond for Chhath. AAP alleges that BJP opposes Chhath every year.