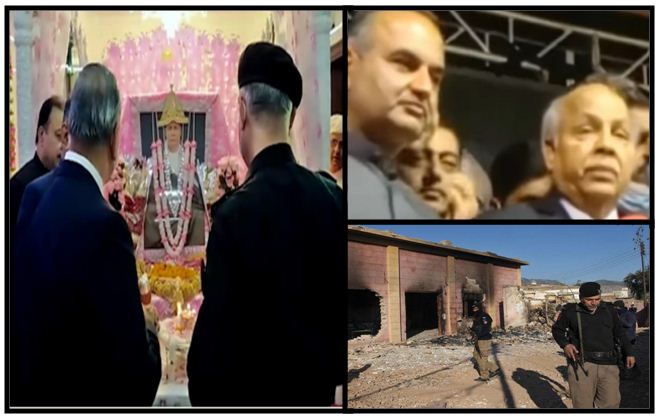 New Delhi, (IANS)| Chief Justice of Pakistan (CJP) Gulzar Ahmed inaugurated the renovated Shri Param Hans Ji Maharaj Temple in Karak, Khyber-Pakhtunkhwa (KP) on the occasion of Diwali. Express Tribune gave this information. In December last year, a mob led by a local cleric and others attacked the temple and completely demolished it.
Addressing the inaugural function on Monday, Justice Gulzar said that the Supreme Court has always taken steps to protect the rights of minorities and will continue to do so in future also.Reportedly, he highlighted that according to the Constitution, the Hindu community has equal rights with people of other religions.The CJP said that everyone loves their holy places and no one has the right to harm anyone’s religious place.
He further said that the Supreme Court assures the minorities the protection of their religious freedom and it is a duty under the Constitution to provide protection to the minorities.Speaking on the occasion, Ramesh Kumar, Patron of Pakistan Hindu Parishad and PTI leader said that he is grateful to the Chief Justice for taking timely notice of the Karak incident.He said that the maintenance of the temples is the primary responsibility of the Evacuee Property Trust Board.
The report said that Kumar said that if four other historical temples in Pakistan are reopened, thousands of Hindus will be able to visit them and this will improve the country’s image in the world.He also announced to organize a conference to remove the negative perception created against the minorities.

Is Keshav Maurya in the race for chief minister in the 2022 assembly elections as well? Learn

When Priyanka told the sign of her being an Indian, she said that my pickle is with me. when priyanka chopra said my mother, temple, achaar is with me | AnyTV News