by Amit Tripathi
in India, Latest News
Reading Time: 5 mins read
0
A A 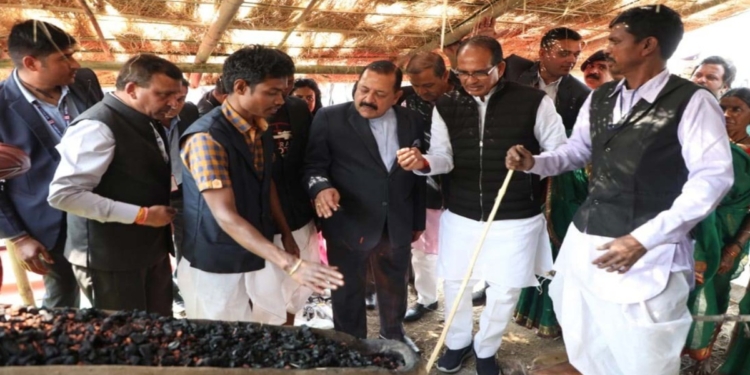 New Delhi. Chief Minister Shivraj Singh Chouhan has said that curiosity and stubbornness are the mothers of science. Science is considered the mother of technology, but curiosity is also the mother of science. Curiosity only helps us to understand any formula of science or mathematics. Therefore, it should be our aim that we should spend maximum energy in awakening the curiosity towards science in the public mind. But if there is curiosity for a subject and there is no insistence to complete it, then that work can never be completed. There are many deadlocks in any work, but it is the stubbornness that keeps us determined to complete that work. Keeping this formula of curiosity and stubbornness in mind, Science Technology and Innovation Policy-2022 has been implemented in the state. Making scientific thinking and understanding a part of daily life, maximum use of modern technologies in government and society and three points of creating new thinking, new learning and new initiative generation are the basis of our policy. The best eco system exists for startups in the state. Chief Minister Shri Chouhan was addressing the program organized on the occasion of the inauguration of the eighth India International Science Festival. Chief Minister Chouhan thanked Prime Minister Narendra Modi for organizing this event in Bhopal.

Demonstration of the goals of the program through digital presentation

Chief Minister Chouhan said that India’s thinking has been scientific since the beginning. India has been ahead in science and technology for thousands of years. These capabilities of India have been manifested under the leadership of Prime Minister Shri Modi. Making two vaccines in a short period of eight months during the COVID period and providing vaccines to more than 100 countries of the world and launching satellites of many countries of the world from India shows India’s talent and capability. India is moving forward as a glorious, prosperous, prosperous and powerful nation under the leadership of Prime Minister Modi. Science and technology have an important role in this, which has been given the right direction by Prime Minister Modi. The whole world accepts that Prime Minister Modi’s thinking is completely scientific.

India is the mother of land knowledge as well as scientific tradition.

Chief Minister Chouhan said that India has a rich heritage. India is the mother of land knowledge as well as scientific tradition. Seven thousand years ago, the idea of ​​a plane was conceived in the Ramayana period. The atomism of Maharishi Kanad, the astronomical theories of Bhaskaracharya are proofs of ancient Indian intelligence. Varanasi and Takshashila were the big centers of medicine science. The contribution of Maharishi Sushrut and Charak to medicine is incomparable. We get information about Navagraha from Aryabhata and Varahamihira. The philosophy of India holds that religion and science are mutually supportive. Renowned scientist C.V. Raman had said that the 20th century may belong to science but the 21st century will be the century of scientific spirituality.

Ample opportunities for innovation available to youth in Madhya Pradesh

Chief Minister Chouhan said that there are ample opportunities for innovation in Madhya Pradesh, more than 2600 startups have started in the state in a year. Not only from big cities but also from towns, youth are moving forward with scientific thinking. The state government is committed to encourage all kinds of startups and innovations.

The objective of the program is to connect science with people

Union Minister of State Dr. Jitendra Singh said that this program has been organized in the form of a festival with the aim of connecting science with people. The picture of India of 2047 will be determined by science, technology and innovation. Therefore, we need to pay special attention in this area. Prime Minister Narendra Modi has made the system of study and research of science simple and rational. This has created new opportunities for the youth and has accelerated the pace of development of the country. Madhya Pradesh has a lot of potential for activities in the fields of agriculture, bamboo and waste to wealth. Union Minister of State Dr. Singh thanked Chief Minister Shri Chouhan for the cooperation and facilities provided by the State Government for the Science Festival.

We are moving towards the goal of self-reliant Madhya Pradesh

State’s Science and Technology and MSME Minister Mr. Omprakash Sakhalecha said that due to the implementation of the State’s Science Technology and Innovation Policy-2022, scientific research and innovation have gained momentum and talents are being encouraged, we are moving towards the goal of self-reliant Madhya Pradesh. Huh. Principal Scientific Advisor to the Government of India, Prof. Ajay Sood said that the India International Science Festival is a celebration of scientific thinking, scientific behavior and way of living a scientific life. Science has its own continuity. We all have to make efforts to achieve the target of Carbon Net Zero by the year 2070 of Prime Minister Modi. Green hydrogen, semi conductors, quantum technology are the areas of the future. Pro. Sood also cautioned for responsible use of Artificial Intelligence.

Science should be included in the people of the country. General Secretary of Vigyan Bharti Prof. Sudhir Bhadoria said that the aim of this program is that science should be included in the people of the country, and the country should get a new vision. India has had a definite science tradition. From Yoga, Ayurveda to Architecture and Astronomy, we find continuity. As per the resolution of Prime Minister Modi, the country is moving towards scientific achievements. India International Science Festival organized jointly by the Ministry of Science and Technology, Ministry of Earth Sciences, Department of Atomic Energy, Department of Space and State Government, Government of India with the aim of promoting creativity in science technology and innovation for a prosperous India . The Department of Biotechnology, Government of India is the nodal agency and Madhya Pradesh Council of Science and Technology and Vigyan Bharti Sanstha are the organizers of this festival at the local level. The four-day event will continue till January 24. It will have the following activities in 15 sectors. In which activities related to students, young scientists, startups are prominent.