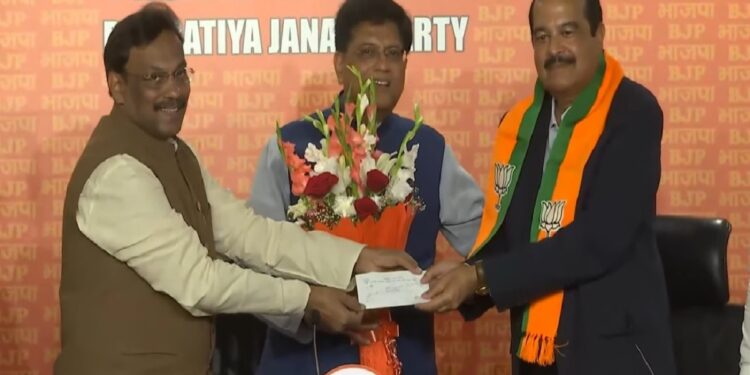 New Delhi. Assembly elections are due in Himachal Pradesh later this year. Ahead of the elections, the ruling Bharatiya Janata Party (BJP) has already started devising a strategy to woo the opposition. This time the Aam Aadmi Party has also entered the electoral fray to give a fight to the BJP. But the condition of the country’s oldest party Congress seems to be getting worse. Congress veterans are seen leaving the party one after the other. Meanwhile, bad news has come to the fore for the Congress in Himachal Pradesh. In fact, before the elections, Himachal Pradesh Congress Working President Harsh Mahajan has said goodbye to the party and joined the Bharatiya Janata Party. On Wednesday, Harsh Mahajan joined the saffron party in the presence of Union Minister Piyush Goyal and joined the party. There is also news that BJP can field him from Chamba.

Says, “I was in Congress for 45yrs… today, Congress has become directionless, leaderless. There’s neither a vision nor workers on grassroots.” pic.twitter.com/uGYT741pVp

Let us tell you that before the elections to be held in Himachal at the end of this year, it is being considered a big setback for the Congress. Harsh Mahajan has also been a cabinet minister in the Virbhadra government from 2003 to 2008. He was counted among the leaders close to former Chief Minister late Virbhadra Singh. While talking to the media after joining the BJP, Harsh Mahajan targeted the Congress.

He said, “Today the Congress has become directionless, leadershipless. There is no vision, no leaders, no workers to work at the grassroots level.” On joining BJP, Union Minister Piyush Goyal said, “It is a matter of happiness that the senior leader of Himachal Pradesh, who served the people of the state in different positions for 45 years, is presently Himachal Pradesh Congress Committee. Harsh Mahajan, working president, today decided that he wants to join the BJP.

Today the Congress has become directionless, leadershipless. No vision, no leaders, no workers to work at the grassroots level: Harsh Mahajan after joining BJP pic.twitter.com/SN1tV4CO9T