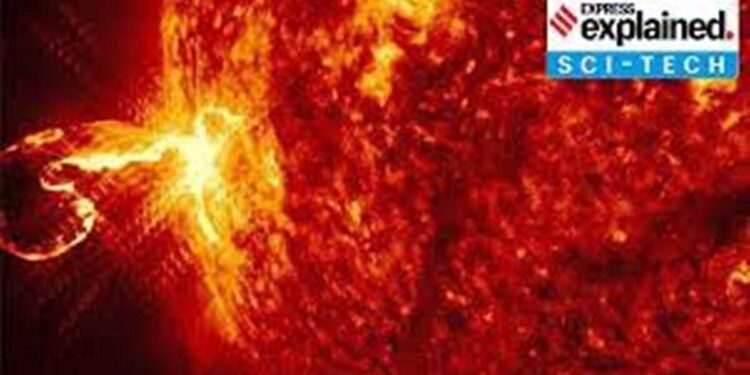 Recently, pictures of a terrible explosion in a spot on the sun surfaced. This explosion is being seen as a threat to the Earth. Scientists say that the radiation emanating from this explosion can cause geomagnetic storms on Earth. This further increases the risk of damage to electronic equipment.

Seeing the sun rising on fire, it seems that the heat age has started. Earth’s temperature has been increasing continuously for the past decade. The thermal changes taking place in the Sun are responsible for this. It is clear from the natural warnings that humanity’s old friendly relationship with nature has broken down. Today both nature and world peace are in danger. Rising global temperatures and radiation from nuclear tests and wars pose a far greater threat to human existence today.

At present, electronic technology is becoming widespread and powerful. This trend will continue in the coming decades as well. Information and communication revolution has also established its dominance. But even this is not free from cosmic dangers. Radiation coming from the sun from space also affects it. Therefore, now scientific research is also being done in this direction that how the sun’s radiations can be avoided.

Scientists believe that by creating a giant bubble in the space between the sun and the earth, dangerous radiations from the sun can be stopped from reaching the earth. To prevent the destruction caused by climate change, scientists at the Massachusetts Institute of Technology (MIT) have proposed creating an intergalactic bubble between the Sun and Earth. This bubble will be the size of Brazil. Its name will be ‘Inflatable Bubble’ (bubble floating in the air).

It will be made of liquid silicon and will be installed in the space between the Sun and the Earth. Dangerous radiation coming from the sun will collide with this bubble and get reflected and will not reach the earth. If this experiment is successful, as scientists are claiming, then it will prove to be a big protective shield for the earth. Although it will not be possible to completely stop the radiation coming from the sun through this bubble, but it can be reduced.

The Space Bubble research project is based on the ideas of scientist James Early who first suggested deploying a deflecting object in space. Then astronomer Roger Engel proposed the bubble-fleet. Although geo-engineering seems to be no less than a science fiction, it is being used successfully in the real world.

Its effect is far and wide in space. The charged particles of these solar flames come towards the earth at a very high speed through space. When they collide with the Earth’s magnetic field, they emit energy in the form of light. This heats up the Earth’s atmosphere and directly affects GPS, navigation, mobile phone and TV signals. Transformers also get burnt due to high current in power lines.

The effect of a solar storm was first observed in 1859. This powerful geomagnetic storm destroyed telegraph networks in Europe and America. Apart from this, a solar storm of low intensity also occurred in 1989. It is believed that the intensity of future solar storms will now be more severe than the previous storms, which will affect satellites circling in space and can stall our communication system and GPS system.

The sun is blazing fire from the sky, ultraviolet rays have also reached a dangerous level. Scientists say that its level has increased three times more than the average, which will prove to be dangerous for humans. In such a situation, the risk of burning eyes, cataract, skin cancer and other diseases of those who go out in the harsh sun is increasing. For the past few months, there has been a lot of movement on the Sun. Recently, pictures of a terrible explosion in a spot on the sun surfaced.

This explosion is being seen as a threat to the Earth. Scientists say that the radiation emanating from this explosion can cause geomagnetic storms on Earth. This further increases the risk of damage to electronic equipment. A geomagnetic storm is a type of solar storm that has the potential to affect the entire solar system. This is a disaster affecting the Earth’s magnetic field. Earlier this year, forty satellites of Elon Musk’s space company fell victim to a geomagnetic storm. Scientists doing research about space weather say that the solar-storm cycle has started from 2020. In the coming days, many such solar storms will be seen on Earth.

A ‘balloon of energy’ erupts from the surface of the Sun during a solar storm. Due to this, the consignment of electric charge and magnetic field keeps on coming to the earth. Scientists say that such a situation was not seen on the sun for a long time, but now the cycle has started once again. Due to such a solar storm on Earth, the power grid and communication system are not only affected, but it is also dangerous for the animals. Such solar storms have a fatal effect on humans.

Scientists’ research on solar storms has also been limited. Earlier it was not taken so seriously. But in recent years many countries have become more serious about space weather. Indian scientists are also working rapidly in this direction. Scientists believe that the radiation coming from the sun cannot be stopped completely with the technology of this space bubble, but it can definitely be reduced. Not that it will be a substitute for current efforts to tackle climate change. Yes, it is a matter of course that it will be the most effective of all the existing measures being taken to deal with the climate crisis.

This bubble has also been tested in space and they will also be used in the coming days. If we reflect 1.8 percent of solar radiation back into space before it hits the Earth, then the problem of rising global temperature can be overcome to a great extent. The beauty of this space bubble is that if something goes wrong with it, it can be replaced. There is a possibility that this space bubble will be placed in the space where the James Webb Telescope is located. Scientists believe that this would be the best place to reflect the radiation coming from the sun. Whatever be the case, this step of the scientists is commendable because the campaign to save the earth should also be done from space.