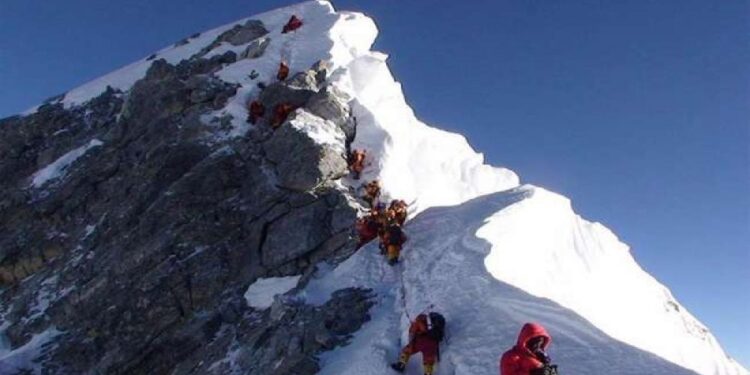 New Delhi. It is said that if your spirits are high, even a storm cannot stop you from moving forward. No matter how many difficulties may come, but if the spirits are unbreakable, then the difficulties seem very small in front of the destination. This is the reason that since childhood, we are given advice and lessons to set our goals and fulfill them. Those who are thinking that the matter is true but why are we being explained so much, friends, the news we have brought for you today is of such a couple who have set a record by sticking to their spirits. Actually, the couple we are talking about is a surgeon by profession and they have recorded their name in history by conquering Mount Everest.

They are the first couple who have scaled Mount Everest, not only this, this medical couple has also registered their name in history with golden letters by scaling the world’s fourth highest peak without supplemental oxygen. Nepal’s media has given this information on Saturday.

Rishi Bhandari, Managing Director of Story Adventure, says that Hemant Lalitchandra Leuva and his wife Dr. Surbhiben Hemant Leuva reached the summit of Mount Everest 8,849 meters high on Friday morning at 8.30 am. Reaching this peak, they have become the first Indian medical couple to have scaled the world’s highest peak.

Let us tell you, ‘The Himalayan Times’ has reported that Dr. Hemant, who has scaled the world’s highest peak, is a professor of surgery at NHL Nigam Medical College. At the same time, his wife Surabhi is working as the Chief Medical Officer in Gujarat Vidyapeeth.

Give this special gift to the couple on marriage, photo frame is not included in it

Give this special gift to the couple on marriage, photo frame is not included in it

The biggest deception of the doctor was revealed, the ‘father’ of 94 children turned out to be