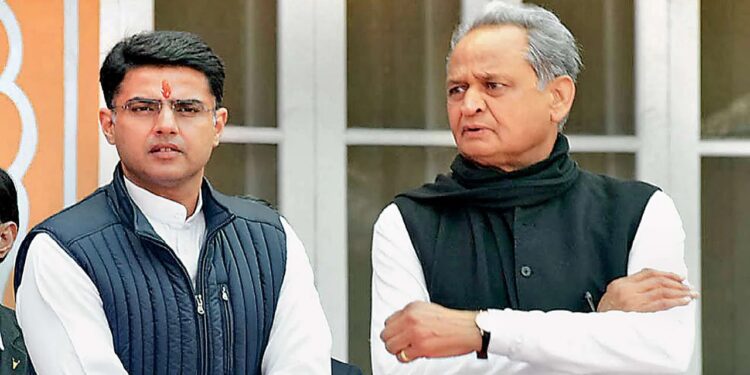 New Delhi. The politics of Rajasthan suddenly came to a standstill late on Sunday night. When 82 MLAs resigned in support of Ashok Gehlot. There has been an uproar in the party after Rajasthan Chief Minister Ashok Gehlot filed his nomination for the post of Congress President. The Ashok Pilot and Sachin Pilot camps have come face to face. Sachin Pilot is being considered as a strong contender for the post of CM of Rajasthan. But before that there has been an earthquake in the Congress. As soon as Sachin Pilot’s name came for the post of CM race, the MLAs of Gehlot faction of Congress have adopted a rebellious attitude. The MLAs of the Gehlot camp have made it clear that Sachin Pilot is not accepted as CM in any form. At the same time, the crisis of Rajasthan has now reached the party high command in Delhi. In such a situation, after coming to the fore of both the factions, the question is who will be handed over the command of Rajasthan.

Meanwhile, Shanti Dhariwal, a close aide of Ashok Gehlot, has given a big statement. After which there may be panic in the party. He is seen telling the Congress high command candidly. In fact, Shanti Dhariwal, while taking the class of the party high command, said, “Today, someone sitting in the party high command should tell which two such posts Ashok Gehlot has.” You are asking for his resignation. Overall, he has only one post of Chief Minister. When the second post is found, then the matter will arise. What happened today that you were ready to ask for resignation. The conspiracy which lost Punjab is also going to lose Rajasthan. Let us calm down. Then Rajasthan will survive. Otherwise Rajasthan will also go by hand.

Meanwhile, it is reported that Ashok Gehlot has reached Hotel Marriott in Jaipur to meet party supervisors Mallikarjun Kharge and Ajay Maken. There is also news that both the observers will return to Delhi and submit a report to Congress interim president Sonia Gandhi regarding the politics of Rajasthan. In such a situation, the question is, what will the party high command do regarding the turmoil in Rajasthan?