Golmaal’s seven seater bike found on the road, would not have seen such a native jugaad 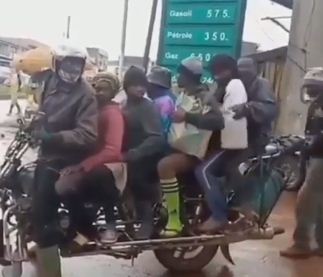 You all must have seen Ajay Devgan’s modified bike in the movie Golmaal. In which more than four people can sit. One such bike is becoming quite viral on social media these days. More than six people can sit on this bike. It is considered a legal offense to ride more than two people on a bike on the road. However, after this jugaad, now the police themselves are also surprised.

In the viral video, it can be seen that the driver is sitting on a bike about 10 feet long. After this slowly people start sitting on the car. Although people started sitting one after the other, but the seat was not being filled. After the seating of more than half a dozen people, that seat ended. This video is becoming increasingly viral on social media. The video was shared on Instagram from the Mimwala news account.

Honda launches powerful bike CBR650R, gets advanced features and price is so much. Honda launches 2022 CBR650R in India at Rs 9.35 Lakh | AnyTV News