India has signed 4 agreements with Russia, will buy more than 6 lakh AK-203 rifles 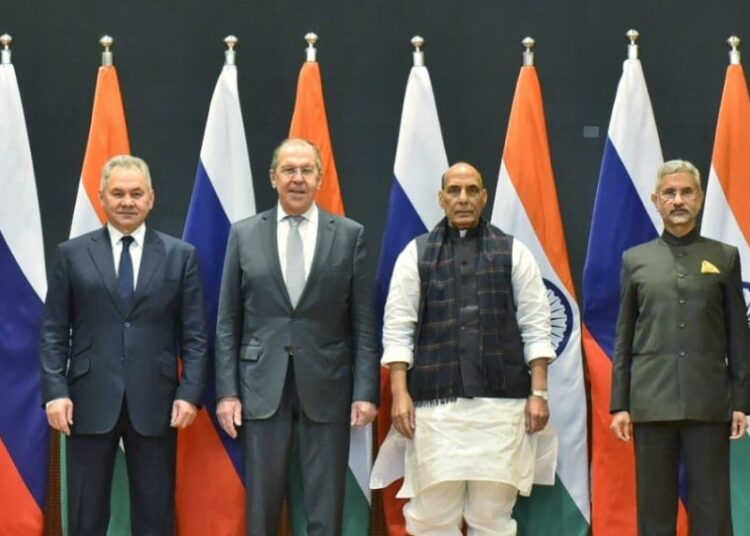 New Delhi, December 6 (IANS)| India and Russia on Monday signed four agreements, including a contract for the purchase of over six lakh AK-203 assault rifles.The decision was taken during a meeting of the Inter-Governmental Commission on Military and Military-Technical Cooperation in the national capital, chaired by Defense Minister Rajnath Singh and his Russian counterpart General Sergei Shoigu.
In his inaugural address, Singh termed Russia as India’s long-standing, special and privileged strategic partner and said relations between the two countries are based on common interests in multilateralism, global peace and prosperity, mutual understanding and trust.Singh appreciated Russia’s strong support for India and stressed that the close cooperation is not targeted against any other country.He expressed hope that this cooperation will bring peace, prosperity and stability to the region and defense cooperation is one of the most important pillars of the bilateral partnership.
ALSO READ  Nokia XR20: Nokia's new 5G smartphone launched in India, know features and price
Singh said before Shoigu, the India-Russia Inter-Governmental Commission on Military and Military-Technical Cooperation has been a well-established mechanism for the past two decades. It provides a platform to discuss and implement a mutually agreed agenda for defense cooperation. You have been actively involved in these discussions for many years. I would like to acknowledge with due respect your valuable personal contribution to strengthen our bilateral defense cooperation.Singh further said that the summit between Russian President Vladimir Putin and Prime Minister Narendra Modi once again reaffirms the depth and vital importance of the special and privileged strategic partnership between India and Russia in the evolving geopolitical situation.
He described the first ever India-Russia Two-Plus-Two Ministerial Dialogue as a special initiative taken by the leaders of the two countries, indicating the high relevance and need for cooperation between the two countries.At the end of the meeting, the two countries signed four agreements, contracts and protocols.Earlier three documents were signed by officials of the two sides, the protocol has been signed by the defense ministers of India and Russia.On February 18, 2019, an agreement was agreed between India and Russia on cooperation in the field of small arms manufacture of the Kalashnikov series.
The contract for procurement of 6,01,427 AK-203 assault rifles was signed through Indo-Russian Rifles Pvt Ltd.The two countries signed an agreement for military technical cooperation from 2021-2031. The two Defense Ministers also signed a protocol of the 20th India-Russia Inter-Governmental Commission on Military and Military-Technical Cooperation.
(Disclaimer: This news has been published directly from the news agency’s syndicate feed. It has not been edited by AnyTV News team.)

Hero Electric joins hands with this company, the battery of electric scooters will be charged in just 15 minutes. Hero Electric teams up with Log9 for fast charging EV battery | AnyTV News

Vidya Balan said, every character taught her something

Punjab Assembly Elections: Election Commission has changed the date of voting, now instead of 14, voting will be held on February 20