Ashwini Vaishnav hugs on seeing a collegemate in the office, know what he said

by AnyTV
in India
Reading Time: 2 mins read
0
A A 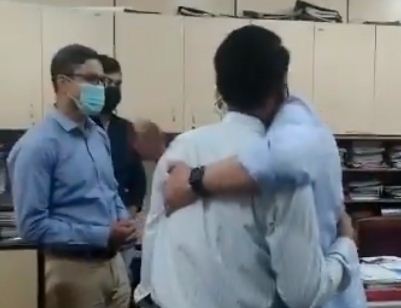 A few days ago, while expanding the cabinet by the Modi government, many new leaders were given a place in the cabinet. In this new cabinet, Ashwini Vaishnav has become the new Railway Minister of India. As soon as he became the Railway Minister, Ashwini had come into action mode and ordered all the employees working in the office to work in shifts.

Born in Jodhpur, Ashwini Vaishnav is a 1994 batch IAS officer. In the year 2019, he has been a Rajya Sabha MP from Odisha. After which Sidah has entered the Union Cabinet without working as a Minister of State. While being the Prime Minister of Atal Bihari, Ashwini also worked in the PMO. He took charge after becoming the Railway Minister. A video of Ashwini taking charge of her office is becoming quite viral on social media these days, in which she is seen hugging an engineer.

#railwaysminister @AshwiniVaishnaw meeting an engineer of signal dept at @RailMinIndia When he found that one employee is from the same college as him, the minister said “aao Gale lagte hain! humare college main junior senior boss bolte hain.” pic.twitter.com/Vf8bu1hwlH

Actually this engineer has studied from Ashwini Vaishnav’s college itself. This engineer was his junior in the Railway Minister’s MBM College. As soon as he came to know about this, he hugged him and said, from today you will not call us sir, boss. Because in his college juniors used to call their seniors as boss. Ashwini was told about this engineer by an employee working with him, after which he went to that engineer and hugged him. This video of Ashwini is becoming quite viral on social media. Many people are praising Ashwini’s down to earth behavior in this way.