“Uddhav Thackeray is no less than a crisis for Maharashtra, Hanuman Chalisa recited in Delhi to remove him”, Navneet Rana said in Delhi 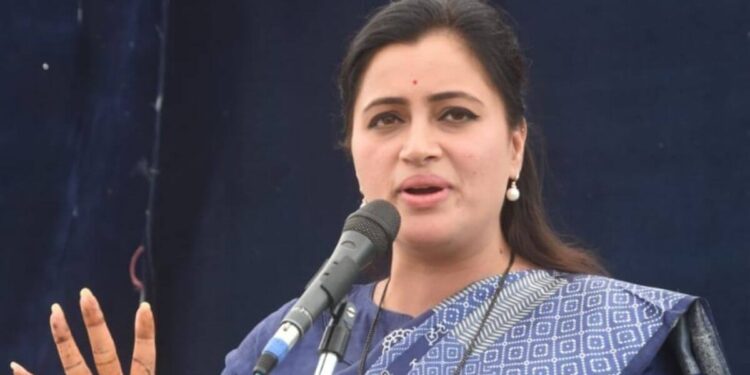 Navneet Rana, an independent MP from Amravati, Maharashtra, has said, “Maharashtra’s Chief Minister and Shiv Sena Chief is no less than a crisis for the state. To overcome this crisis, we recited Hanuman Chalisa in about 5000 years old Hanuman temple in Connaught Place area of ​​Delhi.

In fact, on Saturday (May 14, 2022), she reached the temple with her supporters on foot with a Ramnami patka around her neck. There he recited the first Chalisa in the temple. Then the aarti of Bajrangbali was performed. Not only this, Rana termed Thackeray as “disappointing” and “lost CM”.

Interestingly, this Hanuman Chalisa recitation was done by the Rana couple when a huge public meeting of the CM of Maharashtra is to be held on May 14. On the other hand, Sanjay Raut, senior Shiv Sena leader and executive editor of its mouthpiece Dainik Saamana, tweeted on Saturday, “Looks like we have to get back on the field. Some people have forgotten our style. Jai Maharashtra! Today is Revolutionary Day!” Raut also shared his photo with Uddhav with this tweet.

Later, during a conversation with reporters, he said – Today after two-and-a-half years such a rally is going to be held in Mumbai. Millions of people will come here. Listen to Uddhav Thackeray’s address. Which direction, which role Uddhav Thackeray is going to take. The whole country wants to know. This will be a historic and revolutionary rally.

Navneet describes herself as a Hanuman devotee. She claims that when she was in jail a few days ago, she used to recite Hanuman Chalisa there too. She has worked in films before joining active politics, while her husband Ravi Rana is currently an MLA.

By the way, this is not the first time, when the Rana couple has leveled against the Maharashtra CM on the pretext of Hanuman Chalisa. A few days ago, he had announced to recite Hanuman Chalisa outside the CM’s residence Matoshree, but due to the ruckus of Shiv Sainiks outside his house, they could not go there. Later, the Rana couple had to go to jail for shouting against Uddhav.