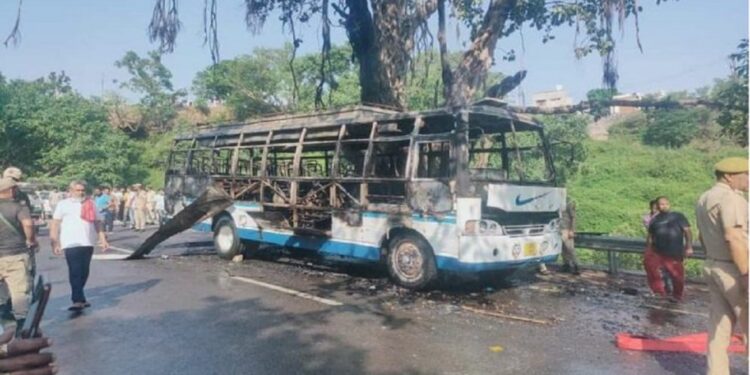 New Delhi. A fire broke out in a bus carrying pilgrims to visit Maa Vaishno Devi in ​​Jammu and Kashmir’s Katra. In whose JD, 4 people died on the spot and information about the casualties of many people has come to the fore. Let us inform that there have been reports of more than 20 people getting injured in the JD of the fire. According to preliminary information, the whole accident happened due to a fire in the engine of the bus. As of now, it is not clear what caused the fire. However, all the injured have been admitted to a nearby hospital for treatment. But in the meantime the condition of two people became critical. After which he has been referred to the Jammu District Hospital. At present, the cause of the incident is being investigated.

Two persons died & 22 others were injured after a local bus from Katra to Jammu caught fire near Kharmal about 1.5 km from Katra. As per preliminary details, bus caught fire from the engine area which soon engulfed the whole bus: ADGP Jammu pic.twitter.com/f1OqFLfoPc

Garena Free Fire Redeem Codes for May 19, 2022: Don’t miss out on the free gifts

Garena Free Fire Redeem Codes for May 19, 2022: Don’t miss out on the free gifts