by AnyTV
in Latest News, Politics
Reading Time: 3 mins read
1 0
A A 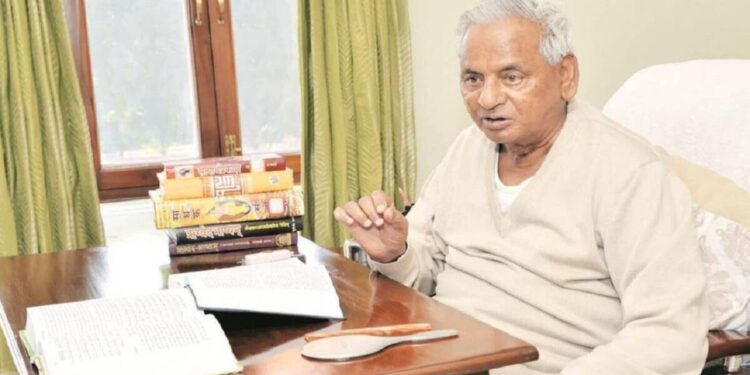 The Government of India has announced 128 Padma Awards on the 73rd Republic Day. In which one name is also of former Chief Minister of Uttar Pradesh and late BJP leader Kalyan Singh. He has been awarded the Padma Vibhushan award posthumously. He died in the year 2021 itself. The government has given him this award for the public welfare done by him.

After the announcement of the government, a tweet by eminent journalist Rajdeep Sardesai has created a stir on Twitter. He tweeted against Kalyan Singh, after which filmmaker Ashok Pandit gave a befitting reply to him.

Rajdeep Sardesai wrote, “Since we live in a country where things get forgotten, but don’t forget that in 1992, when the Babri Masjid was demolished, Kalyan Singh was the Chief Minister of UP. This act was a crime, in which his role was also kept under scrutiny by the Supreme Court. The country’s second highest civilian award is being given to such a person.”

After this tweet of Rajdeep, filmmaker Ashok Pandit surrounded him and wrote, “Stop spreading poison on Republic Day. Keep up your services towards the family.” On this tweet of Ashok Pandit Sajad Sabreen The user of the name wrote, “Why Panditji the truth has been kissed.”

On Ashok Pandit’s tweet, a user named Ranjan Jayanthi wrote, “Kalyan Singh a musical instrument, a hero, a true Ram devotee. Wash your keyboard before typing the name Rajdeep, Kalyan. Your keyboard worships Aurangabad Babars. Kalyan Singh is pure and he merged with Lord Ram.” At the same time, a user named Deepak Shah wrote, “These people can never improve, spent their whole life like this in misleading the country.” A youth named S Prasad took a jibe at Rajdeep and wrote, “Rajdeep Sardesai spreads hatred in the name of protecting secularism…the life lost in communal quarrels is his livelihood.”

Also Read  Navjot Sidhu- Sunil Jakhar will take the edge, Charanjit Singh has cut his throat from Channi; Preparations to form a new Congress in Punjab

Let us tell you that people used to call Kalyan Singh ‘Babu Ji’. People were so hurt by his death that three days of state mourning was declared. He has played an important role in the Ram Janmabhoomi movement. Kalyan Singh is counted after Atal Bihari Vajpayee and Lal Krishna Advani.

Vinod Kapadi took a dig at Narendra Modi on the condition of Kashmiri Pandits after the assassination of Rahul Bhatt. During the performance, Kashmiri Pandits shaved their heads, so the filmmaker took a jibe

Vinod Kapadi took a dig at Narendra Modi on the condition of Kashmiri Pandits after the assassination of Rahul Bhatt. During the performance, Kashmiri Pandits shaved their heads, so the filmmaker took a jibe