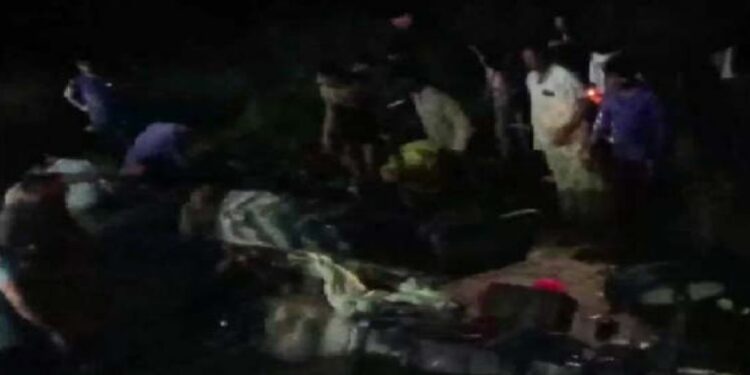 Kanpur. Two major accidents took place in Kanpur, UP on Saturday night. The first incident took place in the Saad area of ​​Kanpur Outer. Here in Unnao, the tractor trolley of people returning from Chandrika Devi temple overturned in a water-filled pit. 26 people died in this accident. Several dozen were injured. At the same time, 5 people have been reported dead due to a direct collision between a loader and a truck at Ahirwan flyover in Kanpur at around 2 pm. 7 other people were injured in this accident.

Regarding the incident in Saad area, a girl riding on a trolley told that while coming back after shaving in the temple, the people of the trolley and the tractor driver had drunk liquor on contract. The girl told that the women had told everyone not to drink alcohol. He told that the tractor was being driven at high speed. The trolley wheel came on the side of the water filled pit and it overturned. The girl told that people did not even get a chance to jump. After the accident, the nearby people reached the spot and started the rescue work. After a while the police also came to the spot. In this accident, UP CM Yogi Adityanath and PM Narendra Modi have announced a grant of Rs 2 lakh each to the families of the dead and Rs 50,000 to the injured. CM Yogi has appealed that people should not use tractor trolley for commuting.

On the other hand, about the accident in Ahirwan, the police told that the people of a family were going to Vindhyachal to have the child shaved. These people were on the loader. When the loader reached the Ahirwan flyover, it collided with a speeding truck coming from the front. According to the police, the collision with the truck was so severe that the loader was blown away. On getting information about the accident, the police reached the spot and started evacuating the people trapped in the loader. All the people were taken to the hospital. There 5 people were declared dead. Several people injured in the accident are in critical condition. Just before this accident, the tractor trolley overturned in the Saad area. Most of the people killed in this accident are women and children. More than 20 people were injured in the tractor trolley overturning incident. All of them were admitted to the hospital.