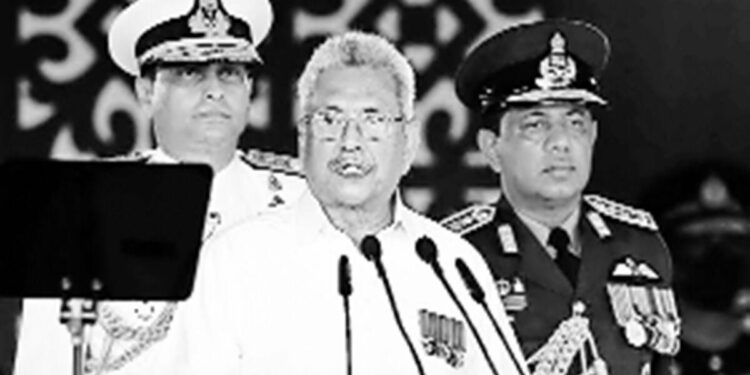 Now the people of Sri Lanka are caught between two moneylenders. On the one hand, China, which is twisting its hand to repay the debt, and on the other, the International Monetary Fund, which is pressurizing the government to change economic policies and take maximum economic benefits and facilities.

A period of deep turmoil is going on in the neighboring countries of India. Although Sri Lanka, Nepal, Pakistan, Bangladesh, Maldives and Afghanistan are all victims of more or less internal turmoil, but the mass rebellion against the Rajapaksa family in Sri Lanka in the past was very aggressive. Prime Minister Mahinda Rajapaksa was forced to take refuge in the naval base of Trincomalee. The Rajapaksa family, which had been monopolizing power for years, has now removed all the people of that clan, except President Gotabaya Rajapaksa.

The result of Rajapaksa’s family rule in Sri Lanka was that political and economic decisions in the country were made only by the will of a few people. Constitutional institutions were being ignored. As a result, the country went on the path of wrong and anti-people economic policies and its result came in the form of the country’s pauper. The role of China in spoiling the economic condition of Sri Lanka was no less.

In the last two decades, China has adopted a moneylender foreign policy by making a major change in its foreign policy. The work that America used to do earlier, China started doing the same. Started giving huge amounts of loans to poor countries for their internal plans. Apart from this, these small countries started gaining a foothold under the guise of capital investment. A rough estimate is that in the last two decades, China has given loans or capital investments of eight and a half hundred billion dollars for about ninety four thousand projects in one hundred and sixty four countries. This policy of China was made for President Xi Jinping’s ambitious plan ‘One Belt One Road’. Through this, China has also been increasing its global economic partnership, diplomatic strength and support.
India’s neighboring countries still have a debt of about eight lakh crore rupees from China. China has fifty thousand crores on Sri Lanka, three lakh crores on Pakistan, 1.35 lakh crores on Nepal, ninety thousand crores on Bangladesh and about two lakh crores on Afghanistan. One of the reasons behind the deteriorating economic and political situation of Sri Lanka is that it does not have the capacity to repay the debt.

Sri Lanka passed a special law last year, giving special exemptions to Chinese-assisted ports and leasing out a lot of land to China in the name of Special Economic Zones (SEZs) and foreign investment. Hambantota port was leased for sixty six years. The result of these events was that inflation in Sri Lanka increased. Vegetables, fruits, milk etc. started becoming so expensive that it became like a dream for common people to buy them. The country’s foreign exchange reserves went into the abyss. There was no money left to buy petrol and fuel. Due to this their prices skyrocketed. In the name of cutting expenses, the Sri Lankan government temporarily closed the embassies in many countries, because there was no money left to pay salaries to the employees.

Now the people of Sri Lanka are caught between two moneylenders. On the one hand, China is twisting its hand to repay the debt and on the other hand the International Monetary Fund which is pressurizing the government to change economic policies and take maximum economic benefits and facilities. It is well known that the loan given by the IMF is not a normal loan, but it gives loans to countries which go bankrupt due to non-payment of their domestic foreign debt. The debt of the monetary fund is not mere debt or interest, but it compels all the economic power and controllers to take in their hands and make policies in accordance with the economic forces of globalization.

In fact, there are global developments behind Sri Lanka’s economic woes as well. By the way, Sri Lanka has been a victim of economic crises since 1930. In 1953, there was a nationwide strike in Sri Lanka. Rajapaksa’s biggest mistake was that he strategized only to increase political power and base, did not think of changing economic policies. By the way, since 1978, Sri Lanka had become the playground of economic liberalization. On the instructions of the IMF and the World Bank, Sri Lanka had taken steps such as the so-called economic reforms such as devaluation of the rupee, reduction in emergency duty, reduction in public welfare schemes, reduction in food grants and open exemption for international trade.

When Sri Lanka started giving freebies to world trade, these policies were openly welcomed and enjoyed by the higher strata of Sri Lanka. Global economic powers projected Sri Lanka as synonymous with progress in the Asian region. Former President Jayawardene made more strenuous experiments to pursue these economic reforms. Even then, the Sri Lankan elite supported him by saying that liberalism required tough hands. The rich section was also benefiting from this.

The office of the President was made the President of the Executive instead of the Democratic President and the powers were consolidated and centralized. Today the general public of Sri Lanka is opposing this system. Now people are demanding progressive and soft policies instead of repressive liberalism in the name of stability. They want freedom from old policies.

Capitalist economists want a solution to the country’s debt relief by increasing inflation by applying the harshest rules to make money, but now it is not acceptable to the public. On March 25, 2022, the International Monetary Fund in its report has suggested measures like increasing direct and indirect taxes, increasing electricity prices, laying off employees, etc. But now public confidence has been broken about these measures and that is why people are on the streets. The solution to this crisis is to break the existing economic-political structure and return to the path of democratization, decentralization and Swadeshi.

In conclusion, the developments in Sri Lanka are a lesson. The first is that any country should avoid the debt of China or the IMF and global economic powers. Because ultimately debt causes the loss of freedom. Second, foreign debt causes foreign interference and interference in some form or the other, which in turn sow the seeds of ethnic, religious, racial or other internal conflicts in countries. Foreign debt damages the country’s economic system and makes it helpless to accept the conditions of the moneylenders of globalization.

One lesson is that both foreign investment and foreign debt are two sides of the same coin. Therefore, instead of creating an enticing and destructive structure of development to maintain its independence, small machines of less capital and employment generating development should be the basis. In addition, global economic powers that democratize and militarize countries by destroying constitutional structures have to be avoided.

Governor Arif Mohammad got angry at those who praised BBC documentary, said- do not trust SC…