Navneet Rana and MLA husband could not get bail, will have to spend two more days in jail 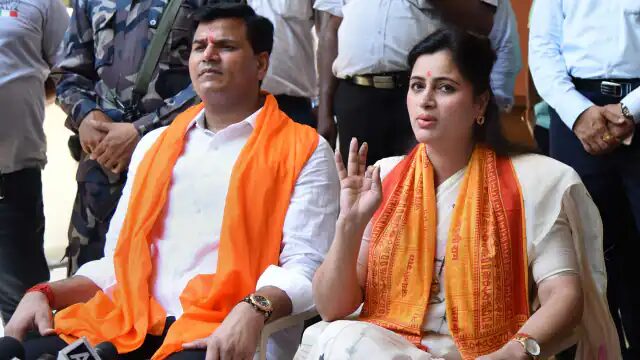 The Sessions Court of Mumbai on Monday deferred the bail plea of ​​MP Navneet Rana and her MLA husband Ravi Rana till Wednesday. The Rana couple will have to spend the next two days in jail. There are many allegations against the Rana couple like creating hatred between the two communities. Navneet Rana and her husband are accused of doing politics by announcing to read Hanuman Chalisa in front of Matoshree. It is alleged that the Rana couple made this announcement so that Maharashtra Chief Minister and Shiv Sena chief Uddhav Thackeray could be reminded of Hindutva.

MP Navneet Rana is currently lodged in the Women’s Jail in Byculla while her MLA husband is lodged in Taloja Jail in Navi Mumbai. Senior advocates Abad Ponda and Rizwan Merchant, appearing for the Rana couple, argued in the court against the police’s claims that their clients had no intention to spread hatred. He said that every citizen has the right to raise voice against the government in a peaceful manner. He said that there was no hope of inciting violence by reading Hanuman Chalisa.

Referring to the police complaint, the defense said that his client wanted to read Hanuman Chalisa alone with his supporters in front of Matoshree. The talk of inciting violence against the government never came even in his dreams. On the other hand, it was argued on behalf of the police opposing the bail that the Rana couple tried to incite violence in the name of religion. Police said that on this pretext a conspiracy was hatched to topple the Maha Vikas Angadi government of the state by disturbing law and order.