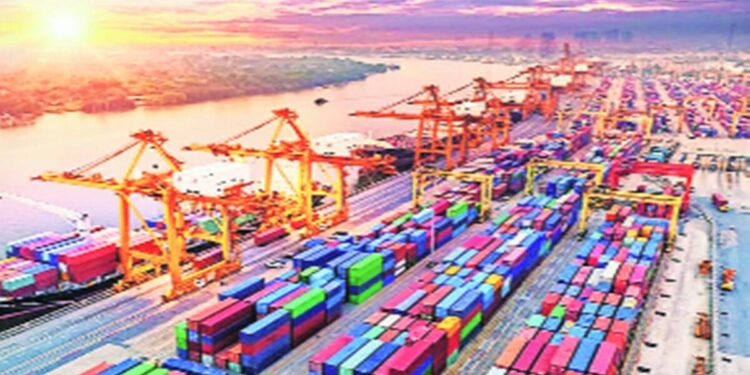 India’s share in the export of goods globally has never been more than two per cent. Whereas India is the second largest populated country in the world. In view of this, this export share will be said to be negligible. If we have not been able to make our mark in the export of goods in the world so far, then one of the reasons is the large scale lag behind in the production of goods.

The exports and imports of any country affect its gross domestic product (GDP). If imports are high and the trade deficit is widening, the currency exchange rate of the country is adversely affected. When there is weakness in the currency of the country, it is expensive to increase exports and imports. Conversely, when the domestic currency is strong, it puts a burden on exports and a lower price has to be paid for imports. If the rate of inflation is high, exports may be adversely affected due to increase in commodity prices and wages.

A good situation is considered when a country exports more than it imports. This results in a trade surplus, otherwise the country has to face a trade deficit. India is currently facing the same problem. Even though our exports have increased in the past, our dependence on imports has been very high. Along with exports, a record growth has also been registered in imports into India. The trade deficit has also crossed all the figures so far. The country has to spend a huge amount on the import of crude oil and gold. Due to domestic requirements, it is sometimes not possible to reduce imports and if it can be reduced, then only to a limited extent. Therefore, if the country has to reduce its trade deficit, then efforts will have to be made to increase exports.

The past two years have been difficult and uncertain for almost all countries. Now the world is recovering from these difficult situations. The central government wants to set realistic export targets for the financial year ending March 31, 2023. But there are difficulties in setting overly ambitious targets because projections about global growth are not encouraging. The World Bank believes that due to supply and trade constraints caused by the Russia-Ukraine war, the global growth rate will be reduced to 2.9 percent this year, from 5.7 percent in the financial year 2020-21.

When it comes to exports globally, it is natural to mention Bangladesh and China. Bangladesh is emerging as a major exporting country in the world. As far as China is concerned, today there will be hardly any of us who do not use products made in China. China is sometimes ridiculed for its perishable or perishable products, but if companies like Apple, which usually do not compromise on quality, make mobile phones and other accessories in China and sell them all over the world. Somewhere there will be a favorable side as well. However, now many small countries are engaged in challenging China. Vietnam, Taiwan, South Korea, Mexico and to a lesser extent Malaysia have also made their mark in global exports.

The Indian economy has never been identified as an export oriented economy. Since the beginning of liberalization in the country in 1991, India’s economic growth has been driven by investments from private and public companies and the government’s spending on socio-economic development plans. The export of goods has only played a supporting role in this. Services now constitute a major part of our exports. After India’s strong position in information technology, the demand for services related to information technology has increased in the developed and other countries of the world as well. India also exports legal services. At present, the share of services in the country’s total exports is more than 40 percent. The pace of expansion of the service sector in the country is also significant. Services exports stood at USD 254 billion in 2021-22, compared to USD 206 billion in 2020-21, an increase of twenty-three percent.

India’s share in the export of goods globally has never been more than two per cent. While India is the second most populous country in the world, this export share would be said to be negligible. If we have not been able to make our mark in the export of goods in the world so far, then one of the reasons for this is being left behind in the mass production of goods. Among other reasons are the frequent changes in the policies of the government due to which investors face uncertainty.

This includes factors such as volatility in tax rates, frequent changes in rules and overturning of policies. Claims are being made about the ease of doing business, but the situation on the ground has not changed as much as it should have. To increase exports, we have to formulate a market-specific strategy for them by focusing on different sectors. The world market is open for the export of medicines, jewelery and chemicals. According to an estimate, we can export diamonds and jewelery worth eighty-eight billion dollars per year, whereas the actual exports are only about thirty billion dollars. India has set a target of exporting goods worth one lakh crore rupees by 2030.

In the Economic Survey of the year 2019-20, it was said that India can increase its share in the world export market to 6 percent on the strength of adding things in the construction sector and this can create about 80 million new jobs. The government has already made policies and incentives for the establishment of export-oriented units. Now the need is to establish such new units in those areas which are relatively backward. Naturally, for this basic facilities have to be made available at these places. This will require investment. But the return of such investment will be long term. The biggest benefit will be seen in getting employment to the people around. There is a need to formulate a strategy to take help of export growth for employment generation both at the private and government level.