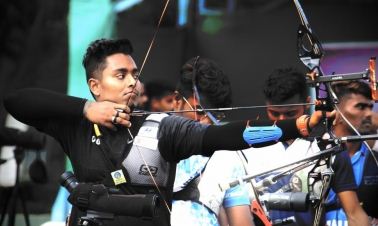 Tokyo, July 26 (IANS)| The Indian archery team, consisting of Atanu Das, Tarundeep Rai and Praveen Jadhav, lost 0-6 to South Korea in the quarter-finals on Monday. The Indian team won the right to face Korea by defeating Kazakhstan in the Round of 16. At the Yumenoshima Park Archery Zone, the ninth-seeded Indian trio of Dennis Gankin, Ilfat Abdulin and Sanjar Musayev lost 0-6 to the trio of Kim Jae Deok, Kim Woojin and Jinyek Oh after 6-2 defeat of the Kazakh team.

Also Read  KKR Vs RR: The spectators became uncontrollable in the middle ground, know why the umpire shouted cheater-cheater slogans!

The Indian team scored 54 in the first set while the Korean team took a 2-0 lead with a score of 59. Similarly, in the second set, Korea scored 59 and went 4-0 ahead leaving behind India’s score of 57. In the third set also, the Korean team scored 59 and India could get a score of 54. Earlier in the close match between India and Kazakhstan, all four sets were decided by one point. The Indians grabbed the first set by one point after Pravin Jadhav and Atanu Das won the last two attempts 55-54 and took a 2-0 lead.

The second set was very easy for the Indians as the Kazakh team amassed a total of 51 points in their six arrows, including 8-8 points thrice. Atanu Das & Co won the set 52-51 to take a 4-0 lead. After the ranking round, eighth seed Kazakhstan showed their talent in the third set and came back with a strong performance. He scored an impressive 57 to beat India by one point and took the score to 4-2. The Indian team, however, struck the bullseye thrice in the fourth set and emerged victorious by a margin of 55-54.