Olympics (Discus Throw): Kamalpreet, who finished sixth in the final, missed out on a medal 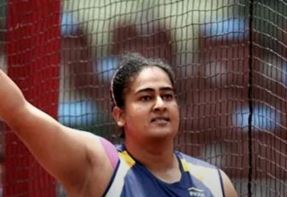 Tokyo, Aug 2 (IANS) | India’s Kamalpreet Kaur finished sixth with a throw of 63.70m in the final round of the discus throw event of the ongoing Tokyo Olympics here. With this, she missed out on getting a medal. Kamalpreet had touched the automatic mark of 64m in qualifying on July 31 and was only the second athlete to do so. After this performance, Kamalpreet’s hopes of getting a medal had increased but in the final round she could not perform as expected and missed out on the medal.

Kamalpreet threw a throw of 61.62m in the first attempt in the final round and was ranked sixth among 12 players. But in the second attempt, Kamalpreet went outside the circle before the disc fell due to which her throw was not valid and she slipped to the seventh position.

Before the start of the third attempt, rain disturbed and the match had to be stopped for a while. Kamalpreet threw 63.70 in the third attempt after the rain stopped. She finished sixth with this throw. He again fouled in the fourth attempt while throwing 61.37m in the fifth attempt. Kamalpreet again fouled in the sixth and final attempt. Kamalpreet’s best throw in the final event was 63.70 meters.

Thailand: This young man lost his private part due to a small mistake, warned all of the doctors

When the groom’s friends sat on the bride’s chair, know what the bride did