On Vinesh’s exit from Olympics, Sakshi said, I could not hold back my tears 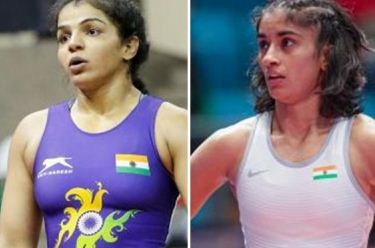 New Delhi, August 5 (IANS)| Olympic bronze-medallist wrestler Sakshi Malik on Thursday expressed her disappointment at the quarterfinal loss of one of India’s biggest medal hopefuls, Vinesh Phogat, in the 53kg category at the Tokyo Olympics. Vinesh suffered a 3-9 defeat at the hands of Vanessa Kaladzinskaya of Belarus at the Makhuhari Messe Hall on Thursday morning.

The Haryana wrestler could not perform as expected against the Belarus wrestler in the last-8 match. He had to fight against Vanessa’s solid defense. However, their defeat was not the last chance for Vinesh’s medal hope as she had the potential to repechaje. However, Vanessa suffered a semi-final loss at the hands of Pang Qianyu of China, ending Vinesh’s journey at the Tokyo Olympics.

Disappointed by the news, Rio Olympics bronze medalist Sakshi told IANS, “I couldn’t hold back my tears. I watched the semi-final match and I can’t tell how I feel right now. It was our bad day in wrestling. Vinesh was injured in Rio and she was very disappointed at that time. But he made a strong comeback after that and worked hard for the Tokyo Olympics. I can’t even imagine how they must be feeling right now.

An emotional Sakshi said, Vinesh was our strong contender. We still can’t believe she is defeated. This is the worst day of my life. I will talk to Vinesh now. Vinesh started her campaign on a grand note as she defeated Sweden’s Sofia Magdalena Matsson, who is a Rio Olympic bronze medalist, 7-1 in her opening bout.

Also Read  Acharya Pramod Krishnam said after meeting Azam Khan in jail, not one or two wounds, the whole body is sieved
ShareTweetShareSendSend