PK On Nitish: What happened in the secret meeting with Nitish? Prashant Kishor turned Nitish’s aspirations with a poem by Dinkar

New Delhi. Election strategist Prashant Kishor has opened his mouth about fighting a war of statements before Bihar CM Nitish Kumar and then meeting him two days ago. Prashant Kishor, popularly known as PK, disclosed the conversation during his meeting with Nitish in a conversation with TV channel ‘Aaj Tak’. Prashant Kishor said that he told Nitish that nothing can be done by opposing BJP without developing Bihar. PK again said that Nitish went to Delhi and met all the opposition leaders, but drinking tea would not achieve anything. The opposition can be strengthened only by making better plans for the people, by bringing out a better face and fielding workers in the field. He has also clearly told Nitish that he will not make any changes in the program of padyatra from October 2 to make his own political identity.

Earlier today, in a tweet, Prashant Kishor had responded in gestures. After the Begusarai firing incident, Prashant Kishor relied on the words of the national poet Dinkar, who was born there. PK tweeted, ‘With your help, I will achieve victory spontaneously, to humanity to come, but, what face will I show? – Dinkar’.

With your help, I will be able to win spontaneously, to the coming humanity, but, what face will I show?

On a question asked about the shooting of several people in Begusarai, Prashant said that the Home Department is with Nitish and the responsibility lies with him. PK said that the law and order situation in Bihar has deteriorated in the last few years. He said that crime is also increasing due to the prohibition of liquor. He said that I have suggested to reconsider it. He said that the poor deprived are getting arrested for prohibition. This is not doing anyone any good. People are upset and the government is also facing loss of revenue. Prashant alleged that the officers of Bihar leave their work and pay more attention to other work. He also said that there is a lot of corruption in Bihar. PK also said that the people of Bihar have now risen above the Mandal or Kamandal. 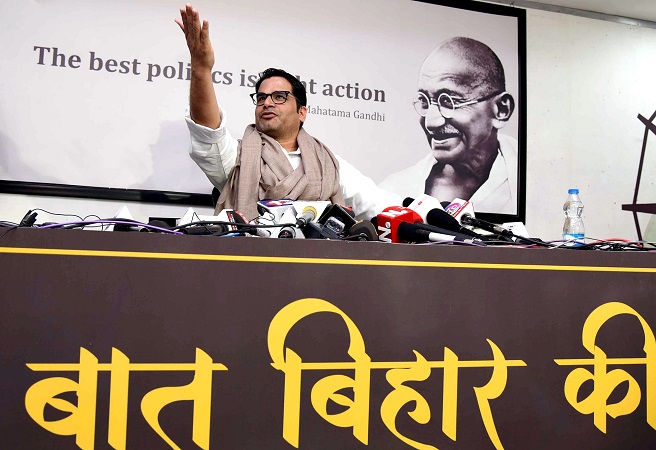