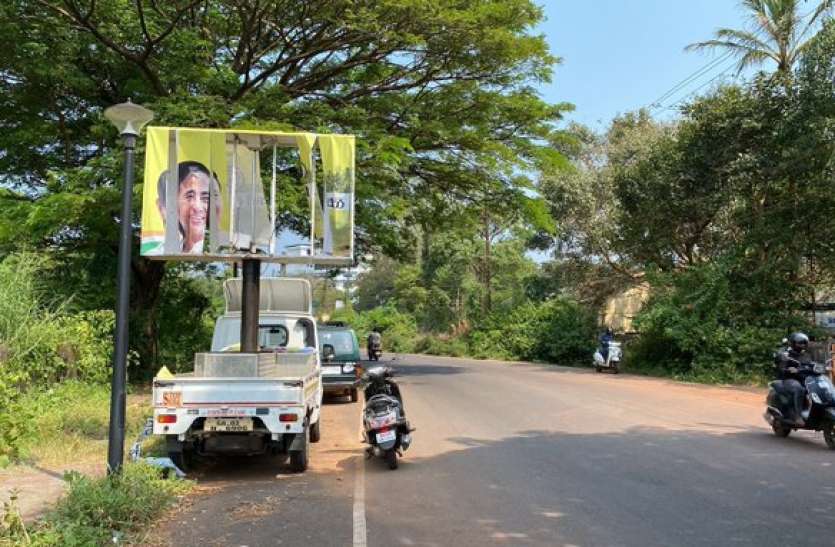 New Delhi. After West Bengal, now the competition of Bharatiya Janata Party and Trinamool Congress (TMC) is also visible in Goa. As the TMC tries to consolidate its ground for the forty-member Goa Assembly early next year, the BJP is taking root. This is the reason why there is a political turmoil ahead of Mamata Banerjee’s visit to Goa from October 28.

The banner of Mamta Banerjee in Goa has been torn, not only this, Mamta Banerjee’s face has also been sooted. After this, the political stir has intensified.

After inducting Congress leaders into the party in Goa, now West Bengal Chief Minister Mamata Banerjee will go on a five-day tour of Goa on October 28.

ALSO READ  It is still our dream to see Kabaddi recognized as an Olympic sport: Ajay Thakur

There has been an allegation of tearing down banners and posters and putting soot on the posters before Mamata Banerjee’s visit to Goa.

TMC leaders have leveled this allegation on BJP. Meanwhile, the Goa TMC has submitted a memorandum to the Governor, demanding the removal of the BJP government and asking him to intervene in the matter.

Mamta Banerjee is currently on a tour of North Bengal. After returning from her North Bengal tour, the Trinamool Congress chief will leave for Goa on October 28. She will hold a meeting with party leaders in Goa.
In fact, before Mamata Banerjee’s Goa tour, former Union Minister Babul Supriyo and MP Saugata Roy, who joined TMC from BJP, have reached Goa.

ALSO READ  When sick, the passenger climbed on the wings of the ship by opening the plane door

There, the Goa Trinamool Congress leaders are planning a strategy for Mamata Banerjee’s Goa tour. Not only this, TMC has intensified its attack on the BJP government in Goa. In fact, after the victory in West Bengal at the behest of TMC political advisor Prashant Kishor, TMC is trying to expand TMC to other states as well.

The company released the teaser of the Dark Edition of Tata Safari, may be launched next week, know what is the update on the price. Tata Safari Dark Edition teased ahead of launch check details here | AnyTV News

Mouni Roy’s wedding date revealed, destination wedding will be held at this location. mouni roy wedding with suraj nambiar will be held in goa on 27 january | AnyTV News

While driving the car, you will talk on the phone like this, the challan will not be deducted!