Rajasthan: Statewide protest of Vishwa Hindu Parishad on 16 May against the systematic injury to Hindu faith in Rajasthan 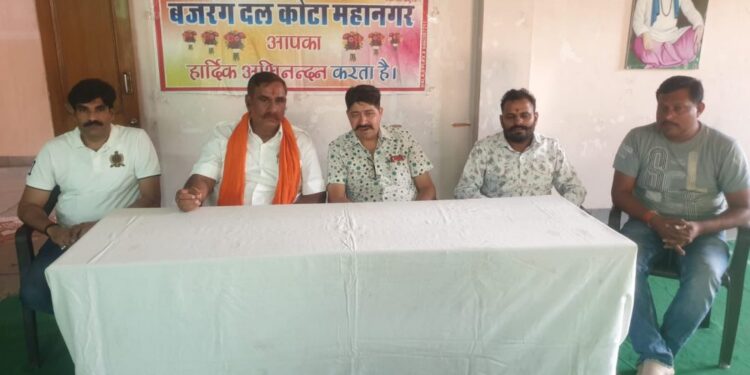 New Delhi. In view of the attack on Hindu faith in Rajasthan, VHP has announced to hold a state-wide protest on May 16 after holding a press conference. Communal incidents have been happening in Rajasthan since the Hindu New Year and during these incidents the Congress government present in the state is being accused of discrimination against Hindus. In the same episode, the workers of Vishwa Hindu Parishad of Rajasthan have announced to hold a statewide protest on May 16 after meeting. Bajrang Dal Yogesh Renwal, Co-Provincial Convenor from Kota, says that “in a systematic and systematic manner, murderous attacks are being carried out by Muslim community people on sisters, daughters and activists of Hindu organizations in various districts and justice to the people of Hindu society who are victims of violence.” And instead of giving economic support, the Rajasthan government is giving political protection to the people of the Muslim community.”

Also Read  Shahid Afridi: 'I was discriminated against for being a Hindu, forced to convert to Islam', Kaneria's serious allegations against Afridi

During the ongoing tenure of the Ashok Gehlot government in Rajasthan, the state of Maharani Padmini, the daughters of the state are suffering, the workers of Hindu organizations and the shrine is not safe. Section 144 on festivals like Deepawali while not in Ajmer Urs, demolition of Sita welcome gate of Salasar Balaji Dham in the dark of night, planned violence on Hindus celebrating New Year peacefully in Karauli, Shri Ram Navami, Hanuman Jayanti, Ambedkar Jayanti and Mahavir Swami Attempts to make the event a failure by imposing section 144 in many districts on the celebrations of Jayanti, the killing of a Hindu organization worker in Bhilwara and the demolition of a 300-year-old Shiva temple in Alwar are many such examples from which the state government has tried to appease the Hindus. Emotions are displayed.

Metropolitan Vice President Mohan Malav and Metropolitan Convenor Mukesh Sharma collectively accused the Rajasthan government of being appeasement and biased and said that due to the lack of any coercive action by the state government on the people of the Muslim community involved in the riots, in this way. The criminal minded elements of the U.S. have become very violent, they are now openly attacking the Hindu festivals, celebrations and celebrations due to unethical patronage and various government agencies instead of taking strict action against them, they are attacking the harassed Hindus. It is giving more encouragement to people with criminal mindset by making false cases.

VHP Department Minister Mukesh Joshi said that “Vishva Hindu Parishad is very upset and angry with these attacks on Hindu society, so on Monday, 16 May, a complete dharna will be held in the entire Rajasthan state till the Tehsil level and a memorandum will be given if Even after this, if the Rajasthan government does not take any effective decision, then Vishwa Hindu Parishad will make a big movement.

UP: Survey work completed in Varanasi’s Gyanvapi Masjid, Hindu side claims to have got Shivling from the well