Amidst heavy rain, this Kerala couple reached the wedding pavilion sitting in Tapele 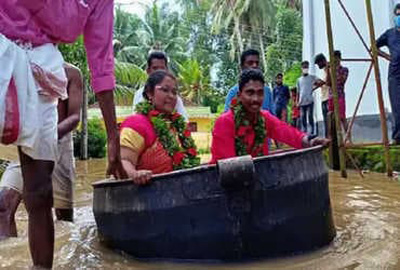 For the past several days, the havoc of rain continues in the southern state of Gujarat, Kerala. Heavy rains have also caused heavy damage in many areas. Many events have also been washed away due to heavy rains. But even in the midst of heavy rains, Rahul and Aishwarya from Kerala decided to get married. This unique couple made a unique entry in their wedding mandap, the video of which is becoming quite viral on social media.
Due to heavy rain, the wedding pavilion was filled with water till the waist. Despite this, the couple decided to get married on time. In the midst of heavy rain, the couple reached the wedding mandap with the help of a large tapa. Both used Tapele as a boat. This marriage, which took place between heavy rains and floods, has become a reason for discussion on social media.
Let us inform that due to the heavy rains for the past several years, more than 25 people have died in Kerala so far. South and central Kerala have been affected the most due to the rains. Kottayam and Idukki districts of the state have recorded the highest rainfall. Due to which only water is visible everywhere in the district. Many incidents of floods, rains and landslides are coming to the fore.

When a woman told Shahrukh her missing son, King Khan had to appear in court

The government raised so much money by selling the assets of Nirav Modi and Vijay Mallya, who chose the banks