An employee of Taj Hotel did such a thing that Ratan Tata became emotional, said – heart touching moment 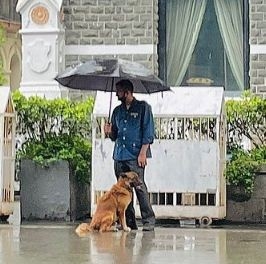 Heavy rains in Mumbai are causing trouble for the people. Everywhere when the situation of water logging has arisen. The condition of the animals becomes worst during the rainy season. In times like these, a small effort or kindness on our part can be a huge relief to such animals. One such example is given by an employee of Taj Hotel in Mumbai, when it was raining heavily in the city, the employee did something that even Tata Group Chairman Ratan Tata took note of it.

Actually Ratan Tata shared a picture on social media on Friday. In this picture, an employee of Taj Hotel in Mumbai is standing with an umbrella to protect a stray dog ​​from rain. This kindness of the employee caught the attention of Tata Group Chairman Ratan Tata and he himself decided to share the picture. This picture is becoming very viral on social media.

Ratan Tata posted this photo on his Instagram account and wrote, “Should share my facility with those who don’t have it. This employee of Taj is very kind. He has shared his umbrella for stray dogs when It’s raining. It’s a heart-warming moment amidst the hustle and bustle of Mumbai. This kind of help can be of great help to the stray animals.”

Many of his followers are commenting on Ratan Tata’s post. People are describing the Taj staff as very kind. One user wrote in the post comment, “This employee of Sir Taj deserves a salary increase or something special for his kindness.

An official, who is currently battling rain in Maharashtra, said on Friday that many parts of five districts in Maratha have received heavy rains. Out of which water has increased in irrigation schemes and demos in the district. At least 20 circles in five districts of Marathwada received heavy rains on Thursday, the official said. The highest rainfall was recorded at 145.25 mm in Patoda circle of Beed district.