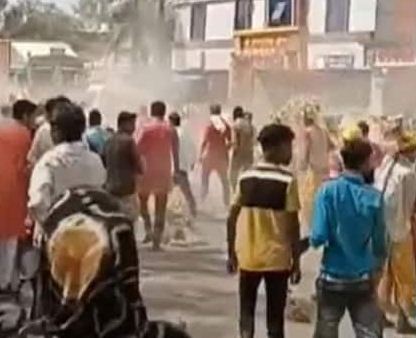 The festival of Dussehra is being celebrated across the country today. Everywhere people celebrate the victory of divine powers over demonic powers by burning Ravana. In such a situation, a major accident has come to the fore in Chhattisgarh. A serious accident took place during the Dussehra tableau in Jashpur, Chhattisgarh, in which a speeding car rammed 20 people. Four people were killed in this whole incident and many others were seriously injured.
According to the detailed information, during this accident in Pathalgaon, which came in Jaspur, Chhattisgarh, people were participating in the Dussehra tableau. During this, a speeding car had come from behind and caught people in its grip. Four people died in this accident. Later, people chased the car and caught the car and caught the car. After seizing the car, he had beaten up two people sitting in the car and later set the car on fire.
After getting information about the incident, the police team reached the spot and rescued both the accused from the crowd and took them into their custody. After this the SUV was checked and a large quantity of ganja was found in it. During this, the mob had also accused an ASI of taking action, after which he was suspended.
After the accident, Jashpur Block Medical Officer James Meinz said that one dead body has been brought to the hospital, while 16 -17 people are also undergoing treatment. After the incident, there has been an atmosphere of tension in the entire area. Due to this, security teams have been deployed in the village by the system.

Cows and buffaloes are filled in the classrooms of government schools, know what is the reason

Bollywood’s love triangle, due to which many relationships got spoiled

The policemen could not see the suffering of the people, so got a new road built with their own money.

Mr. Khan, I have no interest in hugging you – when KBC contestant spoke to Shahrukh, this was SRK’s reaction