Gurugram: People chanted hymns in protest against Namaz being held in public places 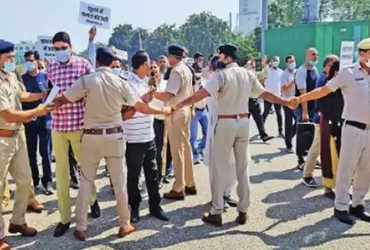 In Gurugram Sector 47, which came near the country’s capital Delhi, there is a continuous protest by the local people against the Muslims offering Namaz at the open park. In this sequence, the local people protested against offering Namaz for the second consecutive week on Friday. During this, people gathered on the spot and sang hymns with the help of mike and speaker and raised slogans against the government. Considering the seriousness of the matter, heavy police force was also deployed at the spot.
According to the information, the police resorted to barricading from all sides to prevent people protesting against offering Namaz from reaching the spot. However, the police say that the police had earlier asked the people of the Muslim community to move to another place via Subhash Chowk to avoid protests. Also, after this last week we had a meeting with representatives of both the communities and we are trying to resolve the matter. In such a situation, around 12 o’clock on Friday, the local people living near the place gathered and started singing bhajans. During this, he also raised slogans against the state government for failing to stop him from offering Namaz in open spaces.

Amazing story of Ajab Prem: This woman kept sleeping by laying a cot on her lover’s grave, know the whole matter

Esha Gupta refused to be a bed, so the director wanted to do this work

If she stopped meeting the lover, the wife got her husband killed, know how the truth came out