UP: Dasaratha really gave his life in Ramviog scene during Ramlila, know the shocking incident 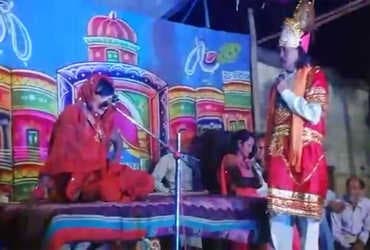 Ramlila was organized in Hasanpur village of Bijnor district of Uttar Pradesh. Every character in Ramlila is very important for the people. Everyone gives immense respect to the characters who play the characters. In the same way, the characters who play the character also become completely devoted to that character. The scene of Ram disconnection during Ramlila is very painful for everyone. The story of Rama, Lakshmana and Sita leaving for the forest leaving King Dasharatha is very emotional. Sometimes the characters themselves are not able to come out of his sentimentality.
Something similar happened in the Ramlila happening in Bijnor, when Dashrath, who was playing the role of Dashrath, while playing the scene of Ram’s separation, Rajendra Singh, who played the role of Dashrath, had really given up his life. After the separation of Rama, those who played the role of Dasharatha fell on the stage itself. Seeing Rajendra Singh falling down, his companions immediately approached him.
Rajendra Singh was playing the role of Dashrath in Ramlila for the last 20 years. His acting was so good that people used to keep watching him. In this incident that happened on October 2, after the curtain fell on the stage, Rajendra had to get up and leave. However, this did not happen and seeing him fall down, his co-stars came to him. After the death of Rajendra Singh, there was mourning on the entire stage.

When the woman gave birth to a child in the flight with the help of doctor and cabin crew, the pictures went viral

Now Modi government will give protection to the houses of the people against flood, earthquake and fire