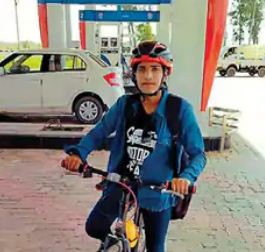 It is said that the relationship between grandparents and grandchildren is very unique. A child loves his grandparents more than his parents. Even a minor injury to one’s grandson or granddaughter can make grandparents nervous. At the same time, seeing the grandparents in any trouble, the heart of their grandchildren does not move. One such case has come to light from Rajasthan, where a 17-year-old granddaughter had cycled from Jaipur to Bharatpur to meet her grandmother. Granddaughter came to know that her grandmother’s health was bad, so she just left to meet him immediately.
During this journey, Aarti had also forgotten the way and went towards Agra. When she saw the Fatehpur Sikri board on the way, she realized that she had lost her way. She had come 20 km ahead of her route in the wrong direction. Due to this Aarti came back and again on her way. In this way, the journey of Aarti increased by 40 kilometers.
Aarti says that she goes by cycle to meet all her relatives. When Aarti came to know that her grandmother was ill, she insisted on meeting her. But Aarti’s mother asked her to leave after a few days, but Aarti went alone to meet her grandparents. Aarti’s parents had no idea that Aarti had gone to Bharatpur to meet her grandparents.
Aarti studies in class 11th. He is fond of traveling by bicycle. Aarti also has an elder sister and an elder brother, who are studying. Father Brajesh runs a grocery shop in Arjun Nagar, Jaipur. Grandmother and grandfather live in Dehra village of Bharatpur. Aarti’s grandmother Lajja Devi works as a helper in the Anganwadi of Dehra village, due to which she stays in the village. His grandmother had a seasonal illness. He had fever.

Now you will be able to easily bring home your favorite car and bike, these banks are giving the cheapest auto loan. List of banks which gives Auto Loan on Cheapest rate | AnyTV News

Nexzu Bazinga electric cycle launched in India, will run 100km on a single charge, can also be brought home on EMI. Nexzu Bazinga e-cycles with 100km range you can buy on EMI too | AnyTV News